Joint Workshop conducted in Korea by Centrient Pharmaceuticals and Indian Institute of Technology - Delhi, India on Sustainable Manufacturing of Pharmaceuticals 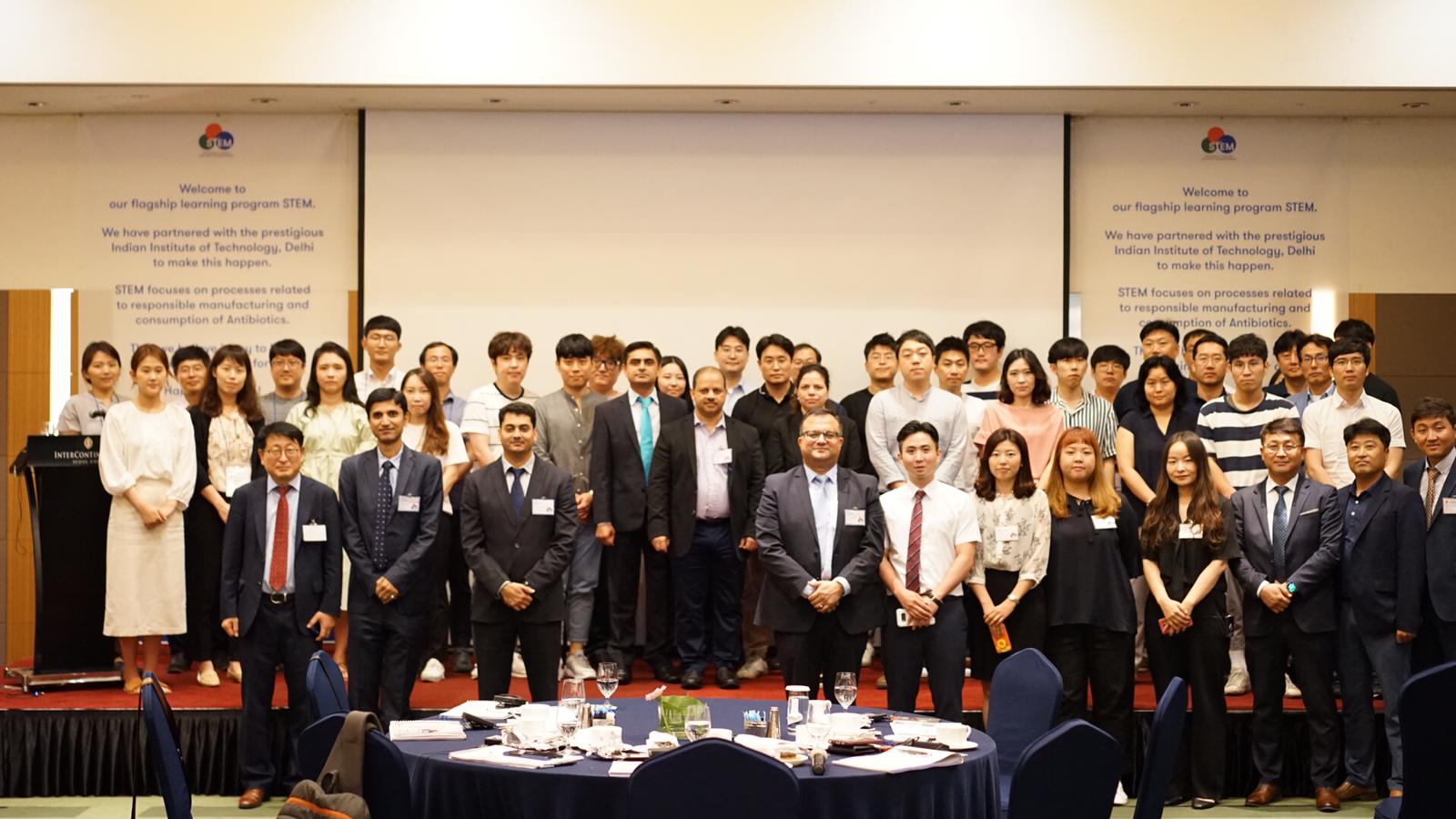 Centrient Pharmaceuticals, a global leader in sustainable antibiotics manufacturing, in partnership with Indian Institute of Technology - Delhi, India organized a workshop on ‘Sustainability Through Excellence in Manufacturing’ (STEM) in Seoul, South Korea. The workshop imparted training and education on advanced clean and sustainable manufacturing techniques for pharmaceuticals. The session was attended by nearly 50 participants from Manufacturing, R&D, Regulatory Affairs, Quality Control/Assurance and Purchasing departments of leading pharmaceutical companies in Korea.

The World Health Organization (WHO) recognizes Antimicrobial Resistance (AMR) as one of the top ten threats to public health worldwide. According to the AMR Review (2014), nearly 700,000 people die each year due to AMR, and by 2050, this number is projected to reach 10 million per year unless strong actions against the drivers of AMR are taken. Next to misuse and overuse of antibiotics, environmental factors like release of inadequately treated antibiotic manufacturing effluent into the environment play an important role in development of drug resistant ‘superbugs’.

Tim Rutten, Business Director – Asia Pacific and Africa, Centrient Pharmaceuticals stated: “To effectively tackle AMR, a ‘One Health’ approach with multi-sectoral involvement is required, with governments, civil society, and industry playing their part. Many treatments and medical procedures, including surgery, we take for granted would be impossible without antibiotics and it is essential to safeguard these essential medicines for future generations. At Centrient Pharmaceuticals, we believe that the pharmaceutical industry needs to take the lead to ensure antibiotics are produced sustainably and to prevent the release of effluent containing antimicrobial activity into the environment. Advanced technologies and processes are available to remove antibiotic residues from pharmaceutical waste. Through STEM workshops, we aim to share expertise with our industry partners to jointly raise the bar and combat AMR.”

A WHO report revealed that overuse of antibiotics was a major factor contributing to resistance in South Korea, with an average of 28 defined daily doses (DDD) being used per 1000 people in 2015, higher than other developed countries. Over the past years, South Korea has made advancements in AMR containment and in 2016, launched their National Action Plan on AMR (2016-2020) in line with the One Health approach. Besides promoting prudent use of antibiotics, Korea’s National Action Plan focuses on strengthening the surveillance system, which is expected to impact monitoring of environmental factors of AMR as well. The Centers for Disease Control and Prevention of South Korea established a customized surveillance system for South Korea, called Kor-GLASS, in 2016, which is now being scaled up.

Prof. Anurag S. Rathore, Indian Institute of Technology, Delhi stated: “Adoption of advanced technological innovation is needed to ensure that pharmaceutical manufacturing becomes sustainable and does not contribute to the rise in AMR. Since Korea is a manufacturer as well as consumer of antibiotics, training of representatives of pharmaceutical companies can help address multiple facets of the issue. The STEM workshops introduce participants to clean manufacturing and waste management practices to reduce antibiotic pollution, which can eventually also be scaled up to other sectors.”

To further R&D, by 2017, Korea had allocated funds worth 65 million euros to AMR related research, including developing new-age antimicrobials and modernization of livestock and poultry management systems to eliminate non-therapeutic use of antibiotics.