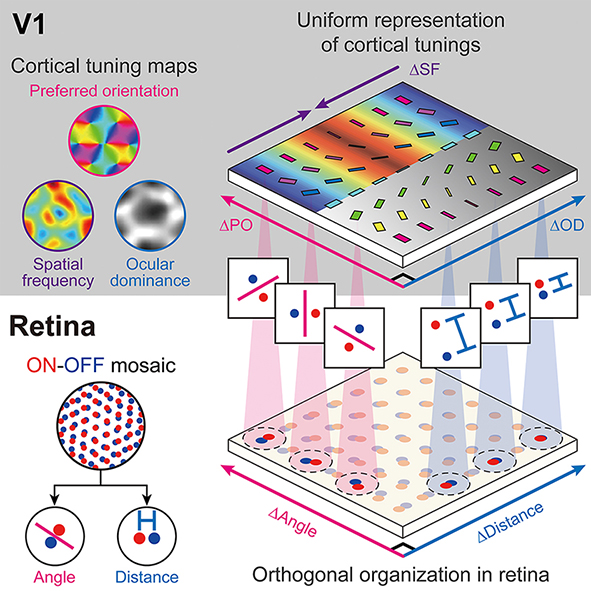 Researchers at the Korea Advanced Institute of Science and Technology (KAIST) have explained how the regularly structured topographic maps in the visual cortex of the brain could arise spontaneously to efficiently process visual information. This research provides a new framework for understanding functional architectures in the visual cortex during early developmental stages.

A KAIST research team led by Professor Se-Bum Paik from the Department of Bio and Brain Engineering has demonstrated that the orthogonal organization of retinal mosaics in the periphery is mirrored onto the primary visual cortex and initiates the clustered topography of higher visual areas in the brain.

This new finding provides advanced insights into the mechanisms underlying a biological strategy of brain circuitry for the efficient tiling of sensory modules. The study was published in Cell Reports on January 5.

In higher mammals, the primary visual cortex is organized into various functional maps for neural tuning such as ocular dominance, orientation selectivity, and spatial frequency selectivity. Correlations between the topographies of different maps have been observed, implying their systematic organizations for the efficient tiling of sensory modules across cortical areas.

These observations have suggested that a common principle for developing individual functional maps may exist. However, it has remained unclear how such topographical organizations could arise spontaneously in the primary visual cortex of various species.

The research team found that the orthogonal organization in the primary visual cortex of the brain originates from the spatial organization in bottom-up feedforward projections. The team showed that an orthogonal relationship among sensory modules already exists in the retinal mosaics, and that this is mirrored onto the primary visual cortex to initiate the clustered topography.

By analyzing the retinal ganglion cell mosaics data in cats and monkeys, the researchers found that the structure of ON-OFF feedforward afferents is organized into a topographic tiling, analogous to the orthogonal intersection of cortical tuning maps.

Professor Paik said, “Our study suggests that the structure of the periphery with simple feedforward wiring can provide the basis for a mechanism by which the early visual circuitry is assembled. This is the first report that spatially organized retinal inputs from the periphery provide a common blueprint for multi-modal sensory modules in the visual cortex during the early developmental stages. Our findings would make a significant impact on our understanding the developmental strategy of brain circuitry for efficient sensory information processing.”

Image Caption: The regularly structured retinal circuits provide a blueprint of the clustered topography of multiple tuning maps in the primary visual cortex