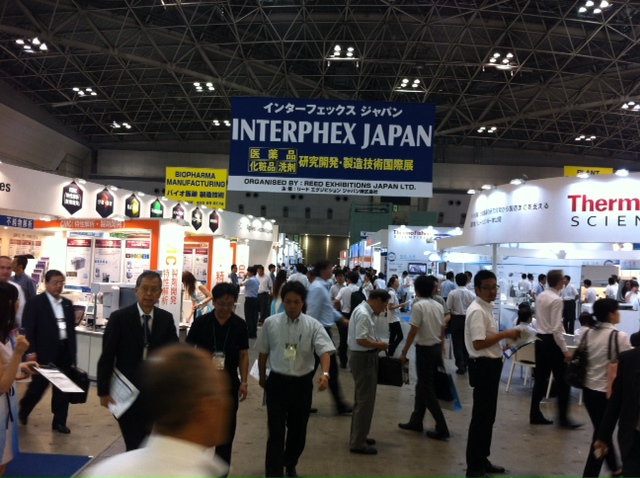 Exhibitors' stall at 7th in-Pharma Japan and 26th Interphex Japan, which are being held from July 10 to 12, 2013, at Tokyo Big Sight, Japan

Tokyo: The 7th in-Pharma Japan and 26th Interphex Japan, which are being concurrently held at Tokyo Big Sight, Japan, kick started with much pomp and grandeur. The keynote address, which featured the theme, 'Quest for Growth', emphasized on how life science firms in Japan are venturing into emerging markets in China, India, Brazil and Russia (BRIC), among other nations, despite stifled innovation in the 'land of the rising sun'.

Dr Iwamoto said that in order to innovate and to grow, a company should create business leaders, who have experience and can deal with the diverse aspects of business in diverse regions of the world. Dr Iwamoto, who formerly faced a tough time working with US firm Syntex due to his English language barrier, said that he follows the success mantra put forward by best selling author Mr Jack Welsh - be full of energy, energize the team mates, be on the edge all times in terms of idea generation, execute protocols, and work with passion.

He further added that leaders should not only 'act' on protocols but also 'produce' the best methodologies. He said that the best way to innovate is to change oneself and create something new. "Innovation is not development of technology, it is what you can develop in order to meet the demands of your customer," said Dr Iwamoto.

Moreover, he cited examples of the gramophone and of the first personal computer, where new innovations were created but were not capitalized upon as their creators thought it would not fetch much monetary value. He said, "It is easy to predict product concept but is very difficult to predict the product value."

While speaking about innovation, Mr Alvarez, said that providing access to innovation was equally important. He commented, "What is the use of producing the best vaccine, if people don't have access to it." While speaking to BioSpectrum, Mr Alvarez said, "The life science industry behaves differently depending on which region of the world you are located in. The definition of innovation keeps changing from one country to another." He also said that innovation is only as good as the customers, who are willing to pay for it.

Mr Alvarez said that for a firm to succeed in today's 'globalized' world, it needs to execute protocols to accelerate its pipeline, excel in the markets in which it is already present, expand presence in emerging markets like China and India, and extend affordable innovation to the customers.

Mr Sakai, who wore the hat of a neutral industry analyst, said that for large firms to succeed in today's stiff competition, one needs to venture into markets where the economic growth is far higher than the healthcare expenditure. He said, "If healthcare costs far outrun the rate at which the economy of a country is growing, it would lead to a crash in the system." He suggested that it is time for Japanese firms to leave the island nation and venture into more potential markets like China and India. He also mentioned that hindrances such as the application of additional three percent consumption tax on drugs from April 2014, influx of generics, premium on Japan's new drug pricing policy and substantial deductions in operating profits will only make the prevalent scenario worse for the pharma industry in Japan.

The 7th in-Pharma Japan and 26th Interphex Japan, which are being held from July 10-12, 2013, have already seen participation from over 970 exhibitors and are expected to witness a footfall of over 35, 000 visitors.