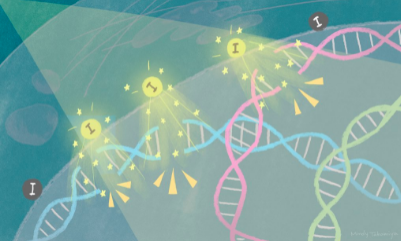 Scientists at Japan-based Kyoto University’s Institute for Integrated Cell-Material Sciences (iCeMS) and colleagues in Japan and the US have shown that cancer cell death is triggered within three days when X-rays are shone onto tumor tissue containing iodine-carrying nanoparticles. The iodine releases electrons that break the tumor’s DNA, leading to cell death.

The researchers dispersed their nanoparticles through tumor spheroids, 3D tissue containing multiple cancer cells. Irradiating the spheroids for 30 minutes with 33.2 keV of X-rays led to their complete destruction within three days. By systematically changing energy levels, they were able to demonstrate that the optimum effect of tumor destruction occurs with 33.2 keV X-ray.

Further analyses showed that the nanoparticles were taken up by the tumor cells, localizing just outside their nuclei. Shining just the right amount of X-ray energy onto the tissue prompted iodine to release electrons, which then caused double-strand breaks in the nuclear DNA, triggering cell death.

The team next wants to understand how electrons are released from iodine atoms when they are exposed to X-rays. They are also working on placing iodine on DNA rather than near it to increase efficacy, and to test the nanoparticles on mouse models of cancer.