Korea moved up four places to replace Germany and become the fifth highest filer of patents in India during COVID-19 times. This signifies that Korean companies are showing interest in entering the Indian market and are contributing significantly. 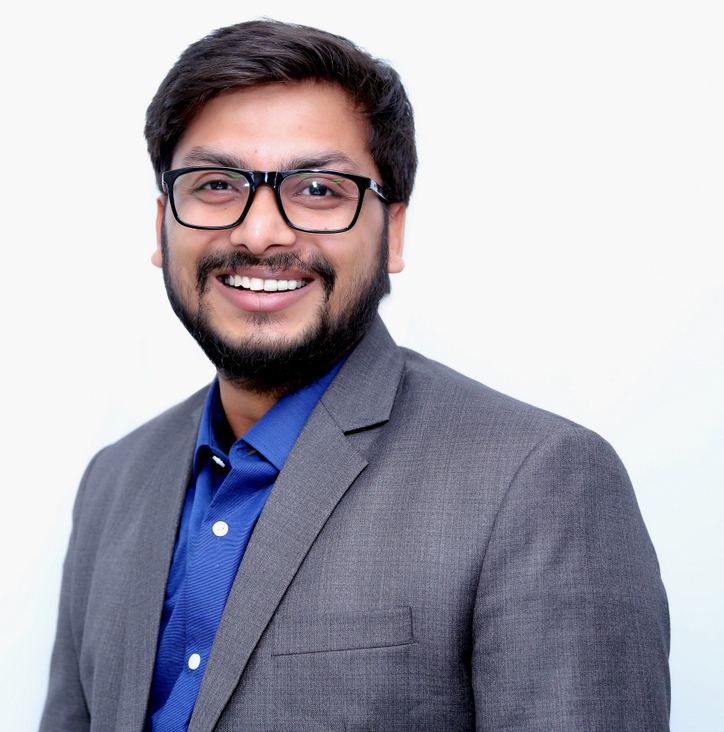 Over the years, the life sciences sector in India has grown significantly. The country’s substantial expertise in formulations, emphasis on developing manufacturing and regulatory capabilities, as well as an inventor-friendly patent regime are just some of the factors driving the growth of the sector. And although some might say that India’s life sciences sector has not fared so well when compared to some of the world’s leading nations, it certainly has come a long way.

If we observe the general patent filing trend in India during the period (2011-2020), there has been a steady increase in the total number of patent filings, with total filings standing at 1,93,327. Further, if we compare the cumulative patent filings in the past five years (2016-2020) with those in the five years before that (2011-2015), approximately over 93,000 patents were filed from 2011-2015, while over 95,000 patents were filed during 2016-2020. Overall, this comparison reflects a substantial increase in filings over the past five years. 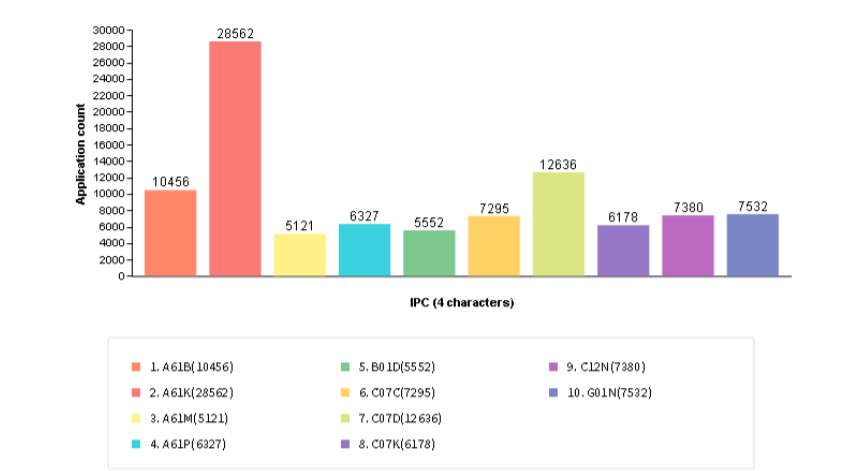 When it comes to technology areas in the life sciences domain (using the IPCs), the most patent filings during the last five years (graph above), the top areas include Diagnostics and Surgery, Medicinal Preparations, Devices for Medical Purposes, Drugs for Treating Different Disorders, Process for Separation or Isolation of Chemicals, Chemical Compounds, Protein Compositions and their Preparation, Microbiology and Genetic Engineering, and Testing processes such as immunoassays.

Out of these, Medicinal Preparations has shown over 28,000 patent filings, the highest number recorded among the technology areas during 2016-2020. Based on the Application years as well, a similar patent filing distribution has been observed for these top ten technology areas. 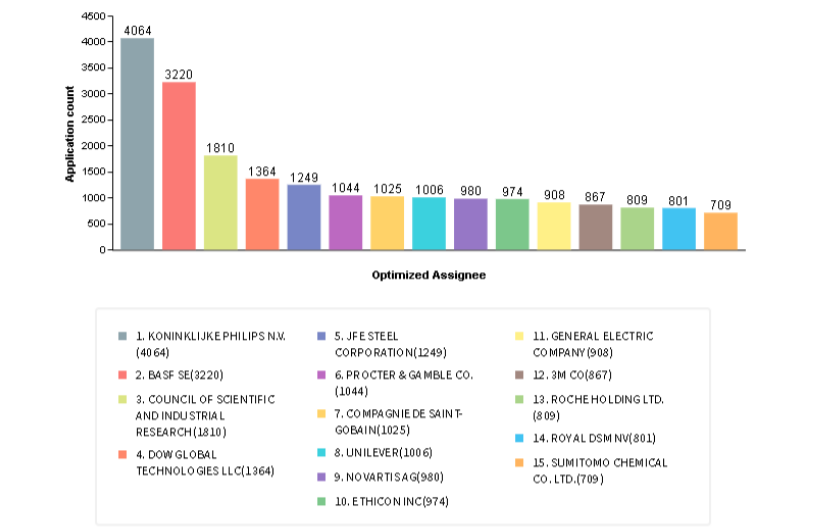 In terms of assignees overall, India has witnessed patent filings from foreign Companies, Indian Companies as well as Academia (research institutes and universities). Out of these, the maximum number of Indian patents have been filed by the foreign firms, indicating that India is considered a leading market destination. Among the top ten foreign contributors in Indian filings between 2016-2020 are Philips, BASF, Dow Global Technologies, Procter & Gamble (P&G), Compagnie de Saint-Gobain, Unilever, Novartis, and Ethicon with 4064, 3220, 1364, 1044, 1025, 1006, 980, and 974 filings, respectively.

The top Indian firms who filed patents in India during the last five years (graph above) include ITC Ltd., Dr. Reddy’s Laboratories, Tata Steel, Reliance Industries, and Cadila Healthcare with 597, 586, 560, 466, and 426 patents, respectively.

But what’s even more interesting is the fact that the academia is also aggressively filings for Indian patents including both Indian & Foreign Universities & Research Institutes. The top filers among the Indian research institutes and universities are Lovely Professional University (LPU), Amity University, Indian Council of Agricultural Research (ICAR), IIT Bombay, and IIT Madras with 569, 513, 458, 396, and 396 filings, respectively. These large number of patent filings from the Indian academia are reflective of their strong research capabilities. While, top foreign research institutes which have filed patents in India in the life sciences sector are Centre national de la recherche scientifique (France) and IFP School (France) with over 400 patents filed by each in last 5 years.

When it comes to the geographical distribution of patents with Indian priority, a vast majority of Indian filers are applying for patents within the country itself, followed by the USA, Europe, China, and Japan. These foreign filings by Indian applicants are indicative of the high potential of these markets and the degree of research done by the Indian inventors in the life sciences sector.

Furthermore, in terms of inventions with a foreign priority that are being filed in India, the USA leads the filing race with over 59000 patents, followed by Europe, Japan, Germany, Great Britain, France, China, Korea, and Australia.

What changed during the pandemic?

Despite the ill-effects of COVID-19 on human lives and businesses around the world, the spirits of the inventors were not dampened. The top ten assignees that filed for patents in India in Life Sciences sector during the pandemic include Ethicon, BASF, Philips, Lovely Professional University (LPU), Unilever, University of Chandigarh, Nippon Steel, Compagnie de Saint-Gobain, Dow Global Technologies, and LG Chem Ltd. Interestingly, LPU and University of Chandigarh with a total of over 170 patents are competing neck to neck with the top foreign assignees. 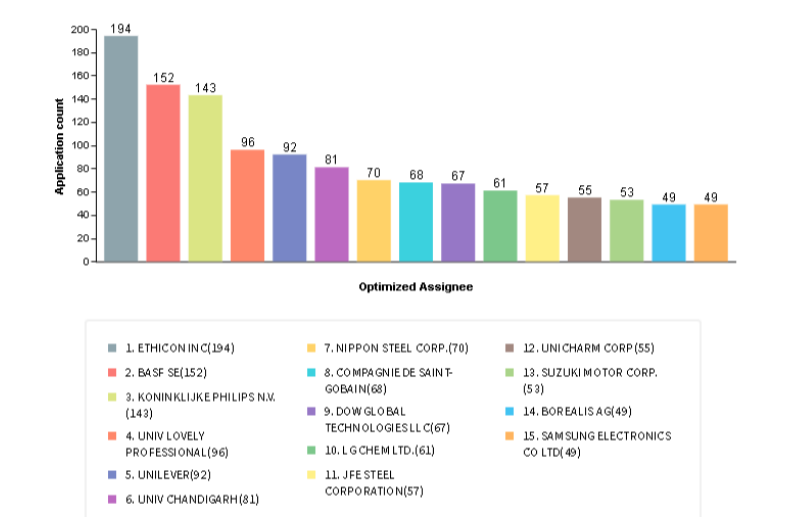 In terms of technology areas, the ones that received the maximum number of patent applications during the COVID-19 time are Diagnostics and Surgery, Medicinal Preparations, Devices For Medical Purposes, Drugs For Treating Different Disorders, Process for Separation or Isolation of Chemicals such as Chromatography and Distillation, Chemical Compounds, Protein Compositions and their Preparation, Microbiology and Genetic Engineering, Testing Processes such as Immunoassays, Catalysts and Colloid Chemistry, Treatment of Water/Sludge, Medical Implants/Prostheses, Disinfectants and Similar Chemicals, and Computational Models. Among these, Treatment of Water/Sludge, Catalysts and Colloid Chemistry, Medical implants/Prostheses, Disinfectants and Similar Chemicals, and Computational Models joined the list of top technology areas during the pandemic.

Besides technology areas, the priority regions also witnessed some changes. Before the pandemic, Germany held the fifth position in terms of priority-wise patent filings. However, Korea moved up four places to replace Germany and become the fifth highest filer of patents in India during COVID-19 times. This signifies that Korean companies are showing interest in entering the Indian market and are contributing significantly.

While the life sciences sector is witnessing rapid growth, a host of challenges exist parallely and some lie ahead. Currently, the pharmaceutical companies, a part of this sector, are facing hitches such as dealing with IP litigations and rising competition due to generic drugs. Besides these, two of the biggest challenges are related to development of approved drugs – prolonged hours spent on research and the substantial investments required for them.

Rampant self-medication due to increased digital connectivity and awareness, and shift in focus towards preventive healthcare and precision medicine are also significant constraints. Lastly but most importantly, low returns on generics and strict guidelines by governments across the globe are few other limiting factors to R&D within this sector.

Despite these challenges that lie ahead, innovations in the life sciences sector in India are increasing rapidly. Factors such as establishment of small molecule development and manufacturing in India by foreign and native firms, increasing activity of companies in development of biosimilars for global market, recent changes in policies for advancing innovative medicines in India, rise in expenditure on healthcare, and active involvement of Indian companies in developing new precision medicines and their collaborations with foreign companies to provide access to unique treatments are anticipated to propel the sector to new heights.