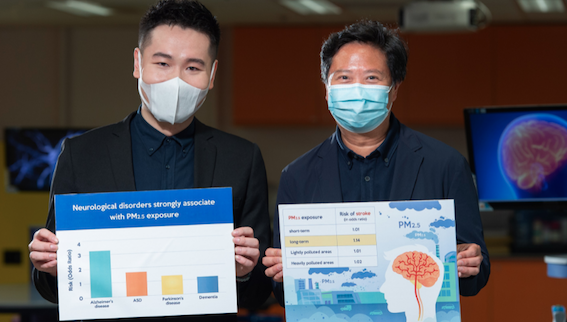 A comprehensive, systematic meta-analysis conducted by scientists at the Hong Kong Baptist University (HKBU) found a significant association between exposure to PM2.5, i.e., fine particulates with equivalent diameters of less than 2.5 microns suspended in the air, and neurological disorders.

These include stroke, dementia, Alzheimer's disease, Parkinson's disease and autism spectrum disorder (ASD). Neurological disorders are the leading cause of disability and the second leading cause of death worldwide, posing serious challenges to global health.

The results revealed that exposure to PM2.5 in general increases the risks of stroke and stroke mortality, with the risk associated with long-term exposure more significant than with short-term exposure.

"While various hypotheses were suggested on the underlying mechanisms of how PM2.5 causes different types of neurological disorders, it remains an area with many unknowns for biomedical scientists to explore. More vigorous research endeavours are required before we can fully understand the mechanisms, based on which we can formulate effective environmental and public health strategies in response," said Professor Ken Yung Kin-lam, Professor of the Department of Biology.