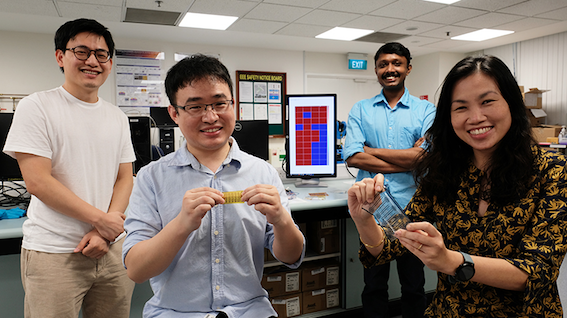 Researchers from Nanyang Technological University, Singapore (NTU Singapore) have invented a pressure sensor that can be ‘printed’ onto flexible material such as paper or plastic film, and which are 100 times more sensitive than existing commercial sensors.

A working prototype of the sensor has been integrated into a robotic hand that is capable of gripping delicate objects, such as an egg.

These sensors can be printed onto large, flexible patches, which can then be used as a ‘skin’ on autonomous robots for real-time feedback and touch sensing. Robots covered in such a skin can react to stimuli the same way that humans do, making them safer and more responsive when deployed in crowds.

Led by Assistant Professor Leong Wei Lin from the School of Electrical and Electronic Engineering, the team, comprising research fellow Dr Chen Shuai and PhD students Surendran Abhijith and Wu Xihu, is developing these further applications for their breakthrough based on a grant from Singapore’s National Robotics Programme.

The sensors could also be a suitable alternative for monitoring the pulse rate and blood pressure of patients whose skins might be extremely sensitive to external pressure. They can be printed onto soft, flexible patches as thin as plaster bandages, allowing medical workers to stick them onto patients and take readings without causing discomfort.