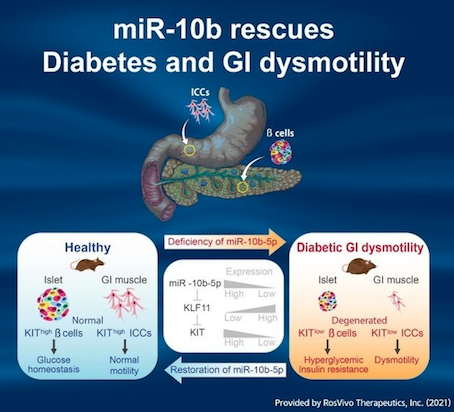 While the development of RNA vaccines has been spotlighted since the Corona-19 outbreak, RSVI-301, a new drug pipeline of RosVivo targeting diabetes, also uses miRNA (micro RNA). Consisting of 20–24 nucleotides, miRNA is known as a "small cleaner" in the body that naturally regulates metabolic processes of genes and proteins. Since these miRNA treatments inject human-derived genetic materials, they are expected to be of greater value in stability than conventional mRNA treatments using external genetic materials like viruses.

In particular, miR-10-5p study, the underlying study of the new drug development, enables the researchers to observe the world's first pancreatic beta-cell regeneration. Nexturn Bio Inc. and RosVivo Therapeutics, Inc. said they will appoint Scientific Advisory Board (SAB) for thorough verification as it is an important precedent for diabetes research. The advisors will be staffed at several major national Hospitals, such as the Stanford University of Medicine, to support professional advice throughout the drug development.

Nexturn Bio Inc. plans to catch both "innovation" and "marketability" through RosVivo's new miRNA drug. It has been reported that CEO Song Myung-Seok participated to discover candidates while establishing a subsidiary. "RosVivo is the first official investment of Nexturn Bio, and RSVI-301 of RosVivo will be an innovative opportunity to open a new era of medicine after mRNA and challenge the complete cure of diabetes," said the CEO.