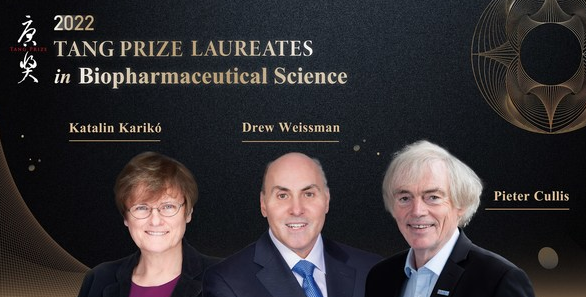 After the 2014 and 2016 winners for the Tang Prize in Biopharmaceutical Sciences were crowned the Nobel Prize in 2018 and 2020 respectively, this category has continued to garner much attention worldwide. This year's award went to three scientists who played a critical role in the development of SARS-CoV-2 mRNA vaccines: Katalin Kariko (a Hungarian-American biochemist), Drew Weissman (an American physician-scientist), and Pieter Cullis (a Canadian physicist and biochemist), for the discovery of key vaccinology concepts and approaches, leading to the successful development of mRNA-based COVID-19 vaccine.

While Dr Kariko and Dr Weissman found a way to reduce the immunogenicity of mRNA, Dr Cullis is credited with designing lipid nanoparticles for the delivery of mRNA vaccines.

Dr Samuel Yin established the Tang Prize in December 2012 in Taiwan. It consists of four award categories, namely Sustainable Development, Biopharmaceutical Science, Sinology, and Rule of Law. Every other year, four independent and professional selection committees, comprising many internationally renowned experts, scholars, and Nobel winners, choose as Tang Prize laureates people who have influenced and made substantive contributions to the world, regardless of ethnicity, nationality or gender. A cash prize of NT$50 million (approx. $1.7 million) is allocated to each category, with NT$10 million (approx. $0.35 million) of it being a research grant.