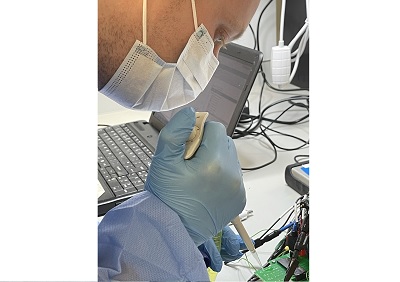 According to a team from the University of Strathclyde in the UK the test could eventually be mass manufactured for as little as 20 pence per test. It is designed for rapid in the field use, similar to a lateral flow test, to allow people in community settings to determine their COVID-19 status.

When a person is self-testing, they would put saliva directly onto the test strip where the measurement is run by the instrument and the result produced on a display, avoiding the discomfort associated with nasopharyngeal swabs.

Compared to other diagnostic tests, glucose blood tests can already be manufactured at scale, with test strips and readers CE marked with regulatory approval for use in the management of diabetes. This means the route to producing a COVID-19 test based on the technology can be much quicker.

The team have patented the experimental technology, and using clinical samples provided by NHS Greater Glasgow & Clyde Biorepository, will translate this proof of concept work into a working product.

It is being commercialised in the form of a spin-out company called Aureum Diagnostics, supported by Norcliffe Capital, which will develop the test into a CE marked commercial product for real-world use.

The company is aiming to have a first version of the test for emergency use ready in 12 months and a fully CE marked test on the market in 18-24 months.

The team partnered with Lifescan in Inverness, a leading manufacturers of diabetes test strips.

The experimental sensor was initially tested with inactivated virus samples at different concentrations, ranging from low to high, alongside negative samples from a commercially available molecular diagnostics standards kit. Hospital laboratory tests were then carried out on real patient samples provided by the NHS Greater Glasgow & Clyde Biorepository. The most recent set of experiments showed detection was possible in 15 minutes.