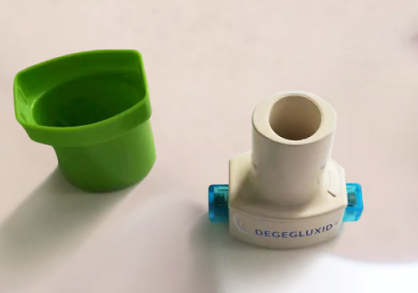 Swiss startup, DG-Nika AG research team has developed a solution for a new approach to protecting the population from a serious illness, a pocket inhaler containing the active ingredient 2-DG (2-Deoxy-D-glucose). The DEGEGLUXID® pocket inhaler is effective both as prophylaxis and as therapy.

The device by DG-Nika AG solution is similar to asthma spray. The formulation consists of 2-DG, a well-known molecule from the glucose family, and is inhaled in tiny particles through the mouth into the respiratory tract. 2-DG disrupts the energy balance in the infected host cells along the entire path to the lungs. This means that virus reproduction is blocked or severely restricted, allowing the body's immune system to combat the infection or to keep it at a low level.

The molecule 2-DG (2-Deoxy-D-glucose) is the active ingredient in this novel approach to therapy, operating as a "Trojan Horse" by blocking the synthesis of virus particles and leading to the cells infected with SARS-CoV-2 dying off. Professor Piotr Kuna, chairman of Department II for Internal Medicine at the Medical University in Łódź and head of the department for Internal Medicine, Asthma and Allergies at the Barlicki University Hospital in Łódź, is assisting the DG-Nika AG international development team. Comprehensive testing has proceeded with the greatest success, the research leader says. "By disrupting the cell's metabolism and blocking the signaling pathways for glucose, we achieve a huge reduction in virus production, along with the apoptosis of the host cells." The tests on the respiratory epithelium show both prophylactic and therapeutic effects.

In vitro and animal, tests have both shown that the 2-DG approach has a sound basis in science. A report from the European Medical Agency (EMA) sets out that the path proposed by DG-Nika AG is credible and should be pursued further. The idea was patented in April 2020, with DG-Nika AG holding exclusive global rights. The aim is for the pocket inhaler containing the active ingredient 2-DG to be available from the second half of 2021 under the trade name DEGEGLUXID®.