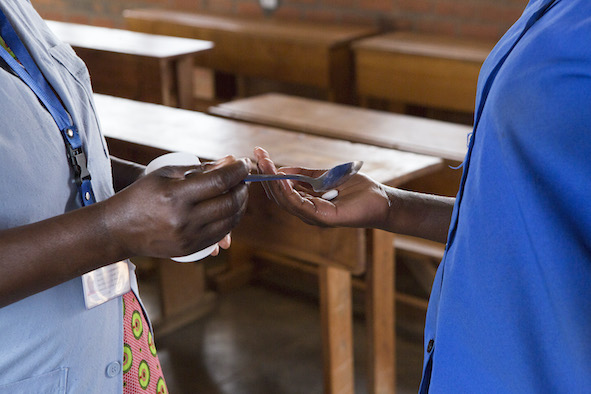 Merck, a leading science and technology company, and the END Fund have announced their partnership to provide Rwanda with 8 million additional tablets of praziquantel per year. The tablets are needed for treating adults endangered by schistosomiasis and will complement Merck’s annual donation for the treatment of school-aged children. The new partnership is an integral part of Rwanda’s NTD Strategic Plan to eliminate schistosomiasis and other NTDs as a public health problem by 2024.

“Back in 2007, more than a decade ago, Merck committed to the fight against schistosomiasis. Today we are taking another important step to eliminate this deadly disease in Rwanda together with the END Fund,” said Belén Garijo, Vice Chair of the Executive Board and Deputy CEO, Merck.

Merck’s donation also represents a significant contribution to the Deworming Innovation Fund, a four-country initiative of the END Fund to progress towards the elimination of schistosomiasis and intestinal worms in Rwanda, Ethiopia, Kenya, and Zimbabwe. “Through the Deworming Innovation Fund, it will allow our partners in Rwanda to reach more underserved communities with NTD treatments. This supports the government of Rwanda’s efforts to end schistosomiasis as a public health problem, which in turn leads to better educational and economic outcomes,” said Ellen Agler, CEO, END Fund.

Merck and the END Fund announced their partnership on the occasion of the second World NTD Day on January 30, 2021. The World NTD Day is supported by over 230 international partners to raise awareness for neglected tropical diseases (NTDs) and to call for action to put an end to these diseases.

To date, the company has donated more than 1.3 billion tablets of praziquantel, enabling the treatment of 520 million school-aged children.

Schistosomiasis is a chronic condition and one of the most common and most devastating parasitic diseases in tropical countries. It is estimated that more than 240 million people are infected worldwide and that around 200,000 people die from it each year. The disease is transmitted by parasitic flatworms and the infection rate is particularly high among school-aged children.