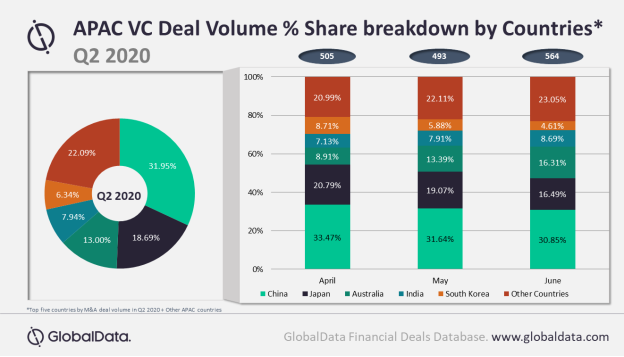 Mergers and acquisitions (M&A) deal activity in the Asia-Pacific (APAC) region remained inconsistent during second quarter (Q2) of 2020. However, China continued to top the region both in terms of volume as well as value, according to GlobalData, a leading data and analytics company.

After decreasing from 505 in April to 493 in May, the number of announced M&A deals rebounded to 564 in June while deals value also decreased from US$33.9bn in April to US$31.5bn in May before increasing to US$35.6bn in June.

China, which is the most prominent market in the region, also witnessed its deal volume and value bouncing back in June. However, its share (as a proportion of total deal volume) declined consistently in volume terms. Nevertheless, China’s share of total deal value witnessed growth in June.

Among these key markets, Japan was the notable country that witnessed a big leap in value terms in May on the back of big-ticket deals announced during the month. Some of these notable deals included Sony’s acquisition of remaining stake in Sony Financial for US$3.7bn, divestiture of 5% stake in Softbank by SoftBank Group for US$2.9bn and Bain Capital’s acquisition of 100% stake in Nichii Gakkan for US$1.1bn.

Aurojyoti Bose, Lead Analyst at GlobalData, comments: “China, from where the COVID-19 outbreak started, started opening up the economy in March, which helped it to witness a decent M&A activity. However, geopolitical concerns and risks related to the second wave of COVID-19 infection still prevails, prompting a cautious approach from investors when considering big investments. Meanwhile, Japan managed to stay in a relatively better position and witnessed few big ticket deals during Q2.”