More than 5,000 tenders were analyzed in Russian public procurement as well as research and development activity at several Russian institutions. 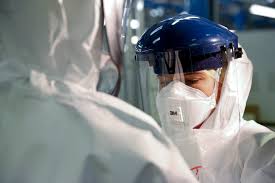 According to a report by a Ukrainian delegation to NATO Parliamentary Assembly, Russia is returning to the Soviet-era development of a deadly Ebola-smallpox virus mix.

As per the news reported by UNIAN, the Ukrainian delegation head Iryna Friz presented the corresponding report highlighting research and development efforts of Russian experts in biological and chemical weapons at the meeting of the NATO PA Committee on the Civil Dimension of Security in Warsaw, according to the press service of the BPP faction. "For at least the last three years, Russia has been conducting research on hemorrhagic fever viruses, in particular, Ebola and Marburg, claiming they are trying to develop vaccines. In fact, it's about their returning to a Soviet project of an Ebola and smallpox virus mix, which is confirmed by the analysis of more than 5,000 tenders in public procurement and scientific activity of several Russian institutions managed by the Russian defense ministry. At the same time, another research organization has been actively ordering and conducting studies indicating development of new military-type poisonous substances with nerve gas properties. The corresponding report was handed over to the Alliance's Headquarters," Friz said.

The Deputy believes that, taking into account the recent report by Lord Jopling (UK), it is necessary to also brief NATO PA members on the report focusing on the issue of chemical and biological weapons of mass destruction. "I do not exclude the prospect of this aspect being included in Lord Jopling's final report as another threat in the framework of Russia's hybrid efforts against other states," added Friz. As UNIAN reported earlier, Lord Jopling presented at NATO PA a report titled "2018 – Countering Russia's Hybrid Threats: An Update" providing a systemic analysis of a wide spectrum of hybrid threats coming from Russia. "The report presents rather clearly a map of the hybrid war Russia is waging against Ukraine as well as the means to counter the threat with NATO help," Friz wrote. She also recalled Lord Jopling's call for the Western countries to do their utmost to strip Russian plutocrats of opportunities to hide their dirty money in the West.