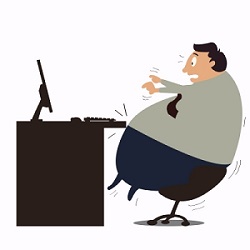 Southeast Asia is alarmed by the growing obesity

Singapore: Though the south east Asian people are considered to be the thinnest in the world, there is an exponential increase in the number of obese people in Malaysia, Singapore and Thailand. Growth in incomes, sluggish lifestyle and western fatty fast food consumption are the main factors contributing to obesity.

These countries are thus taking preventive measures to stop making it a national epidemic like western countries.

Malaysia recently hosted the 12th International Congress on Obesity (ICO), a discussion about what asian countries can do to halt rising obesity rates before they become a public health problem that will cost billions to reverse. The Malaysian government has also aimed this year's "Nutrition Month Malaysia" at fighting obesity in particular, handing out "fight Obesity" guidebooks, launching carnivals around that theme, and even funding anti-obesity and nutrition education road shows in primary schools.

Malaysia is working on increasing awareness about obesity being a public health threat as part of its national strategic plan for non-communicable disease (NCD). Obesity is a key cause of NCDs like diabetes and cardiovascular diseases.

Singapore is also following the lead. "Obesity is a priority for the government", said Mr Zee Yoong Kang, chief executive of Singapore's Health Promotion Board. "There's some intuition that once obesity gets above a certain share of a population, it becomes more of a norm and then businesses and infrastructure accommodate the greater appetite, sucking in more people into that lifestyle," he added. In Singapore, many childcare centres are serving less-fattening brown instead of white rice and public housing blocks have signs urging people to skip the lift and take the stairs. The government has rolled out an incentive-based weight management program for its residents to collectively shed one million kgs (2.2 million lb) in the next three years.

Thailand is also looking at various measures to beat the bulge, including a ban on the sale of carbonated soft drinks at state schools, said Krisada Ruangareerat, manager at the health ministry's Thai Health Promotion Foundation (THPF). The THPF is also thinking of proposing a tax on sweet foods or those with high calories.

These nations hope to reduce healthcare costs that arise from obesity and the disease that develops due to obesity with these prevention measures.