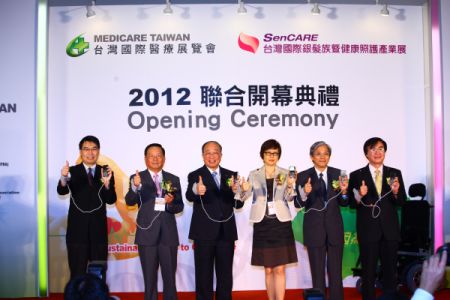 The inaugural ceremony of the twin event at Taipei on June 14, 2012

Every year, the expo at the Taiwan World Trade Center, attracts many thousands of buyers mainly from US, Europe and Japan to the country. "In 2012, Medicare expo has entered its third edition and SenCARE is in its sixth edition. The combined event has 440 companies spread across almost 800 booths exhibiting diversified products in the healthcare and fast growing elderly-care market, which is a focus market segment for Taiwan industry," informed president & CEO of TAITRA Mr Yuen Chuan Chao in his inaugural address at the opening ceremony on June 14, 2012.

Estimates by a Taiwan government agency state that by 2050 sixty percent of the population globally will be over 65 years of age and this is a big opportunity for the Taiwanese medical industry, which is already fairly well-entrenched in the medical and the assisted medical device industry. This year, it is expected that footfalls at the event will cross 60,000 with a line-up of procurement meetings, conferences, professional medical services, diverse mobility aid devices and lease services, making it the largest annual event not only for Taiwan's medical and senior healthcare industries but also the largest such sourcing event in Asia.

According to Ms Huei Fang Chiang, director of Trade Development Division, at the Bureau of Foreign Trade in Ministry of Economic Affairs, Taiwan, this is the result of the focused efforts the government has made since 1998 when healthcare and medical services were first classified as one of the six emerging industries for Taiwan to leverage on. "In 2012, a business of $73 billion (NT) is expected from healthcare and medical services industry," she stated.

This year, the expo added a demo area to its plan, where exhibitors will demonstrate their latest products for visitors to get a hands-on feel of the many new products being launched. Wheelchair and scooter figure is a focus segment at the exhibition which is neatly divided in eight themed pavilions ranging from diagnostics and sterilization equipment to biotech apparatus and pharmaceuticals.

According to the Taiwan Medical Equipment Industry Report 2012 by the Ministry of Economic Affairs, the country's medical equipment market is projected to cross $2.5 billion by December 2012, which is a seven percent increase over 2011.