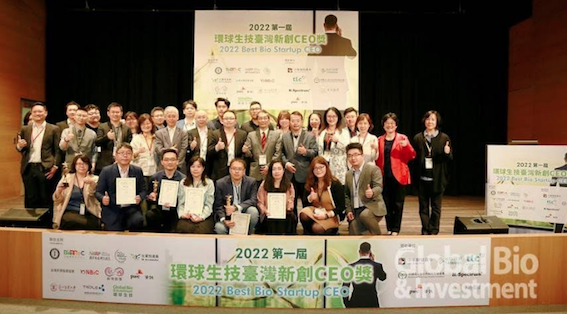 The 1st 2022 Best Bio Startup CEO Award announced winners from 24 Taiwanese candidates on 3rd November 2022. Through three months of preparation, call for applications, proposal review, and an online poll of the audience's favourable CEOs, 24 biomedical startup CEOs had finished their roadshows at the final.

Irene Wang of Lin BioScience beat 24 other participants and claimed a trophy and the top prize of NT$50,000. Wang is a doctor of biochemical science fostered in Taiwan. She led Lin BioScience to reside in JLABS, a life science innovation and incubation hub under Johnson & Johnson. She was also granted as one of the outstanding women leaders at JLABS in 2018.

The second place of trophy and NT$30,000 was won by Joe Yeh, the CEO of aetherAI Technology, a renown medical imaging and digital slide company in Taiwan.

The third place of NT$20,000 and a trophy was won by Dr Yen-Yin Lin of Jellox Biotech, who combined 3D digital pathological imaging technology with AI-assisted clinical diagnosis.

The winner of Popularity Award was voted by more than 8,000 fans online within two weeks. Dr Chia-Jung Chu of Molsentech won the prize among the 24 startup CEOs. Dr. Chu has been working on the biomedical testing of nano-components in the Institute of Physics, Academia Sinica for 13 years. She established Molsentech in 2014.

The Outstanding Potential Award was won by Pohan Chen of CancerFree Biotech. Chen previously worked at Morgan Stanley in the United States, in charge of the company's front-to-back data and information security.

The purpose of the award is to encourage more young CEO talents to take center stage. While it also hopes to build a deeper executive talent pool for Taiwan's biomedical industry in the long run.