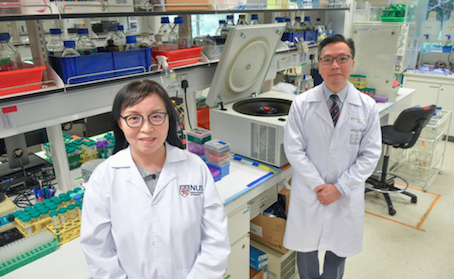 Scientists at the National University of Singapore (NUS) have discovered a novel property of a protein found in human lungs which could lead to the development of biologic drugs to treat chronic obstructive pulmonary disease (COPD), a debilitating, progressive lung disease that is one of the leading causes of death worldwide.

The research was led by Associate Professor Ge Ruowen from NUS Biological Sciences and published in the prestigious scientific journal Proceedings of the National Academy of Sciences (PNAS) in January 2022.

Alveolar macrophages (AMs) are immune cells residing in the airspace of lung breathing structures called alveoli and they can display either pro-inflammatory or anti-inflammatory properties. In COPD, the pro-inflammatory AMs are amplified, which is a main cause of COPD.

Assoc Prof Ge’s team discovered that a lung-resident protein, called isthmin 1 (ISM1), is critical for restraining inflammation in a healthy lung by selectively eliminating the pro-inflammatory type of AMs.

The team discovered that ISM1 helps to maintain healthy lungs by targeting the GRP78 signalling receptor (csGRP78) that is present on the surface of the pro-inflammatory AM, triggering apoptosis (cell death), thereby reducing inflammation.

The development of a drug based on this research is currently in pre-clinical stages of testing. The team plans to study how recombinant ISM1 could also help to develop treatments for other inflammatory respiratory disorders such as acute lung injury, lung fibrosis and asthma, and to devise the best method to administer such therapeutics.