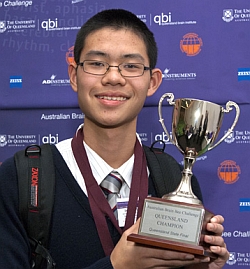 Mr Jackson Huang, winner of the Australian Brain Bee Challenge (ABCC), has been named Australia's 'neuroscientist of the future'

Singapore: Mr Jackson Huang from the Queensland Academy of Science, Mathematics and Technology, has been named Australia's 'neuroscientist of the future' after he won the Australian Brain Bee Challenge (ABCC), which was held recently at Melbourne Convention and Exhibition Center.

He beat seven other Australian finalists and two New Zealanders in a test of brainpower in front of a live audience during a brain-teasing anatomy exam, doctor-patient diagnosis, written test and a neuroscience quiz. The runner up was Ms Zelda Perri of Presentation College Windsor in Melbourne.

ABBC is an initiative of the Queensland Brain Institute (QBI) at the University of Queensland (UQ). Presenting the award, Education Minister Mr Martin Dixon said that the finalists were of an extremely high caliber.

He said, "All the finalists have demonstrated an extraordinary talent, and I hope the Australian and New Zealand Brain Bee Challenge will inspire them to pursue further study in this vitally important field."

Mr Jackson has earned the right to compete in the International Brain Bee Competition held in Vienna, Austria (TBC), in 2013. He will receive return international airfares, accommodation and spending money for himself and an accompanying adult to attend the prestigious international competition.