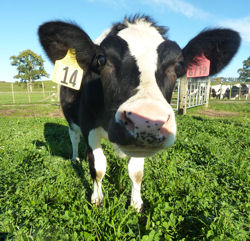 Daisy was produced by scientists at AgResearch's Ruakura campus

Singapore: Scientists at AgResearch in Hamilton, New Zealand, have bred the first cow in the world to produce high protein milk that may be hypo-allergenic. The cow's milk can exclusively address allergies that are due to an immunogenic response against beta-lactoglobulin (BLG).

The work by the scientists at AgResearch's Ruakura campus has been published in the current edition of the prestigious American science journal Proceedings of the National Academy of Sciences (PNAS).

The AgResearch team, led by Dr Goetz Laible, wanted to discover if they could produce milk which contained less of a particular milk protein known to be allergenic."We were successful in greatly reducing the amount of BLG, a milk whey protein which is not in human breast milk and which can cause allergic reactions," said Dr Stefan Wagner, one of the lead authors of the paper. "Two to three percent of infants are allergic to cow's milk, and BLG allergies make up a large part of that percentage."

The news of the breakthrough comes even as dust over a controversial study on GM corn by a team of french scientists is yet to settle. The research published in the Journal of Food and Chemical Toxicology has faced much criticism from different quarters for being "politically motivated" and timed to coincide with the US presidential polls. The study claimed that dietary exposure to glyphosate and a Roundup Ready (RR) corn variety caused tumors, organ damage and premature death in lab rats. The mostly French research team was led by Gilles-Eric SÃ©ralini at the UniversitÃ© de Caen, France.

To come up with hypo-allergenic milk, the AgResearch scientists first tested the process in a mouse model engineered to produce the sheep form of BLG protein in mouse milk. Employing a technique called RNA interference, two microRNAs (short ribonucleic acid molecules) were then introduced into the mouse to knock-down the expression of the sheep BLG protein. This resulted in a 96 percent reduction in the sheep BLG protein in mouse milk.

They next produced Daisy, a female calf that was genetically engineered, to express the same two micro RNAs, this time to target the BLG protein that is also a normal constituent in cow's milk. They then hormonally induced Daisy to lactate. The resulting milk collected from Daisy had no detectable BLG protein and, unexpectedly, also had more than twice the level of the casein proteins that also normally occur in cow's milk.

"People have long looked into reducing this enigmatic protein, or completely knocking it out, because there has been no definitive function assigned to it. So, we developed this scientific model to investigate the effect of knocking BLG protein out on the composition and functional properties of milk, and to determine whether the absence of BLG produces cow's milk that is hypo-allergenic," said Dr Wagner. "This is the real discovery component to this project, and Daisy provides us with the opportunity to answer a lot of those questions."

He added that to avoid the delay of two years before a natural lactation, the milk analysed was from an induced lactation. "We only obtained small quantities over a few days for these initial studies. We now want to breed from Daisy and determine the milk composition and yield from a natural lactation. We also want to investigate the origin of Daisy's taillessness, a rare congenital disease in cows," he said.

Malaghan Institute Director Prof Graham le Gros said, "This outstanding breakthrough has enormous implications due to its potential to reduce the significant impact milk allergies have on our children and neatly avoids the concerns associated with genetic modification of the milk proteins themselves."

Dr Wagner said in future, the basic process of using designer microRNAs to target other genes could provide an efficient tool to change additional livestock traits, for example to produce animals with enhanced disease resistance and/or improved lactation performance.

"This is tremendously significant," said Dr Tom Richardson, chief executive of AgResearch. "PNAS is one of the top journals in the world, and to be published in it reflects the world-leading quality of the science behind this discovery. This will be one of the top-ranking science publications from New Zealand this year."