Pictor offers multiple diagnosis with one drop of blood

Pictor offers multiple diagnosis with one drop of blood 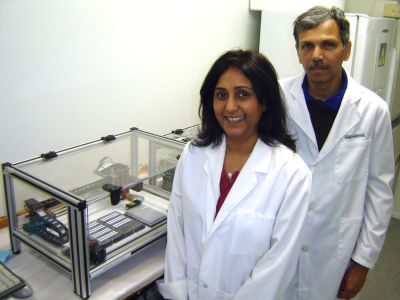 New Zealand-based Dr Sarita Kumble and Dr Anand Kumble wanted to create an affordable diagnostic test platform that could be deployed in those parts of the world with the highest need. The two, who completed their PhD from Mumbai, India, also had first-hand experience of the Indian healthcare system to know that improving healthcare among the rural and urban poor of developing nations required technologies and products that are extremely cost-effective, simple-to-use and readily available.

This led them to develop PictArrays, a propriety clinical diagnostic technology that enables simple and cost-effective testing of blood for a number of diseases. "Asia is a diverse market in which laboratories use products ranging in sophistication from those manufactured by global giants for their closed, highly automated systems to manual strip tests made by small, local manufacturers. We wanted to provide products that were as reliable as those from the global leaders at a cost that would make them accessible to small laboratories," says Dr Anand Kumble.

The duo started their company, Pictor, in 2006 to develop and commercialize this proprietary technology. PictArrays allows eight tests to be done simultaneously with a single drop of blood. Also, a low cost reader using either a web cam or a cell phone camera has been specially designed to obtain the test results.

The Kumbles worked at Stanford University in California, US, for a few years after their PhD and then with some biotechnology companies before moving to New Zealand. The experience came handy when they started out on their project to develop the technology. Dr Anand Kumble had trained in enzymology with Nobel Laureate Prof Arthur Kornberg while Dr Sarita Kumble had worked with renowned gastroenterologist, Dr George Triadafilopoulos, identifying early markers of esophageal cancer.

They wrote a business plan and used pitching skills honed in the tough Silicon Valley venture capital arena to attract a band of New Zealand investors and raised $90,000. This amount was matched by a New Zealand government research grant. The New Zealand government has continued to support Pictor since with grants matching the amounts raised through investment. The first investment was used to set up the company in a garage to keep costs low, while demonstrating the proof-of-concept and filing the initial technology patent at the US Patent and Technology Office, which they accomplished at the end of the first year.

Pictor has since raised another $1.6 million in capital from new investors, moved out of their garage to laboratory facilities in an industrial building overlooking Auckland harbor, and currently has a multi-disciplinary team of engineers, software developers and biologists.

They now have a complete solution for immunodiagnostic testing. The core of the technology are PictArrays, which are redesigned microscope slides made from plastic and consist of 16 wells at the bottom of which 25 tiny dots are printed in a 5x5 grid. This grid of dots allows eight tests with extra dots to ensure that the test has been performed correctly. Each slide can test between 12 to 15 patient samples simultaneously. The tests result in a color and the relative intensity of it provides a quantitative value for the test. The results are read on the PictImager, which is the lowest-cost immunoassay reader in the market, and then analyzed using Pictorial, their proprietary data analysis software, which provides results within two minutes of test completion.

PictArrays have several features that make them an ideal product for laboratories in emerging countries. The use of PictArrays requires no special training since the tests are easy-to-perform, while software-based data analysis removes any subjectivity in interpretation of results. The same product can be used by large reference laboratories testing hundreds of samples each day using standard ELISA processing equipment and by small manual operations, such as rural healthcare centers, or street-corner laboratories still dominant in urban India and South East Asia.

Pictor has successfully pilot tested two test panels: one for rheumatoid arthritis and the other for autoimmune connective tissue diseases, such as systemic lupus, at diagnostic laboratories in New Zealand, Malaysia and Thailand. The company is working with distributors to commercialize these products in Malaysia and Thailand.

It is also developing two panels for screening patients for exposure to ToRCH, Hepatitis B and Hepatitis C. Plans are underway to pilot test them at laboratories in India. Additional panels are planned to screen for a range of tropical diseases, such as malaria, leptospirosis and dengue, as well as a number of highly prevalent chronic diseases.

"We believe that the diagnostic industry is rapidly changing with the introduction of improved point-of-care devices and technologies, such as microfluidics being used for molecular testing. These technologies and products, in conjunction with cell phone-based readers, will allow increased access to diagnostics in remote areas," said Mr Kumble.

Pictor, meanwhile, is working on adapting their platform to enable point-of-care testing with a cell phone-based reader and plans to pilot test the device in late 2013.