NZ develops simple medical device that could prove a life-saver 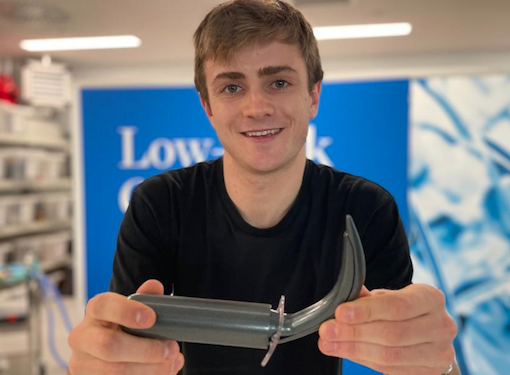 Francis Pooke, from the University of Canterbury, is one of two finalists for Engineering New Zealand’s Student Engineer of the Year Award for his simplified tracheostomy kit – a tool that helps medical staff create a new airway for patients in an emergency.

In a tracheostomy, a breathing tube is inserted into the trachea (windpipe) when the airway is blocked or compromised following a major injury. It is critical for a patient’s survival, however, the procedure is rarely performed because of its complexity and the high rate of complications.

Francis has reinvented the standard tracheostomy kit, creating a new device that makes the process much simpler and reduces risk.

The final design has been tested and found to reduce the time taken to perform a tracheostomy by almost 50 per cent because there are only seven parts instead of the 12 in the current clinical kit. It makes the steps involved easier and more intuitive and halves the number of insertions and removals into the patient’s throat, helping to reduce risk.

The new tracheostomy design is at the prototype stage and has been 3D printed. Francis is hopeful a commercial company will be interested in further developing it and putting it on the market.