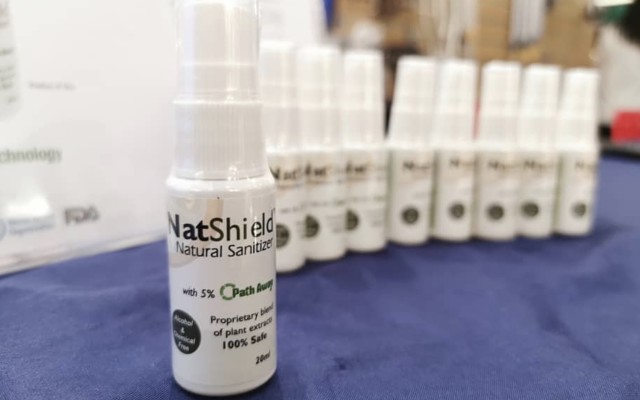 Australia headquartered Holista CollTech announced on 20 Feb 2020 that it will co-develop and produce in Malaysia the world's first nasal sanitising balm using Path-Away(R), a plant-based alcohol-free active ingredient that has proven successful in killing all previously tested corona type viruses without harming humans. Holista extends distribution of Path-Away(R) based NatShield(TM) Sanitiser to include ASEAN, UK and Europe.

Path-Away(R), which has been tested and proven to kill more than 170 pathogens (including viruses, bacteria, and fungi), was developed by Global Infection Control Consultants LLC ("GICC LCC"). It kills the AIDS virus and the resilient Mycobacterium tuberculosis. In Malaysia, it is approved by the Ministry of Health as being effective against the H1N1 virus. GICC LLC, based in Bluffton, South Carolina, was founded by President and Principal Research Scientist, Dr Arthur Martin.

Dr Martin and Dr Rajen Manicka, founder and CEO of Holista, jointly announced, "following the outbreak of Covid-19, the two companies will extend their partnership and accelerate the development of the nasal sanitising balm which will contain Path-Away(R)".

The two companies expect to jointly file a global patent on the nasal sanitising balm first quarter of 2020, and intend to commence production by the third quarter of 2020, ahead of distribution to global markets and the onset of the UK and European winter.

The balm will include Path-Away(R), which is created from a series of individual plants and processes proprietary to GICC LLC. Path-Away(R) attaches to the virus and weakens the cell walls by inhibiting its ability to take up amino acids - the basic building block of cells. This forces the virus cells to clump together, in the process of killing themselves, almost instantly.

Dr Martin said "An airborne virus can only enter the human body through the eyes, the mouth and the nose. The mouth is protected by salivary enzymes and the eyes produce tears with specific enzymes that disable proteins on virus surfaces. The nose, however, is warm, damp and dark especially during winter. Rich in fatty and amino acids, the nasal passage leads directly to sinuses, the throat and of course, the lungs, thus making it the most vulnerable to viruses."

"We are pleased to partner with Holista to develop a nasal sanitising balm equivalent of NatShield(TM) Sanitizer as masks do not provide complete protection to the nose as they are loose-fitting and may allow small droplets to enter the mouth or nose. Since Path-Away(R) is plant-based and alcohol-free, it does not irritate the nose and will be effective for six hours", he added.

UPDATE ON HAND-HELD SANITISER; APPOINTMENT OF BOTTLERS IN THE PHILIPPINES

The hand-held NatShield(TM) Sanitiser, containing Path-Away(R) and developed by Holista is currently bottled in Malaysia and distributed within the 10-country ASEAN region. Stocks have run out in local pharmacies and Holista said today it has appointed three bottlers in the Philippines to meet orders.

Dr Rajen Manicka, CEO of Holista CollTech, said, "Due to health concerns about Covid-19, Holista is striving to meet the demands for the hand-held NatShield(TM) Sanitiser locally in Malaysia as well as in Australia".

DISTRIBUTION EXTENDED BEYOND ASEAN TO INCLUDE THE UK AND EUROPE

GICC LLC has agreed to grant Holista marketing and distribution rights of Path-Away (R) beyond ASEAN region to include UK and Europe. Holista will distribute NatShield(TM) Sanitiser and the nasal sanitising balm into the UK and Europe. Holista will also work collaboratively with GICC LLC in the North American market to market NatShield(TM) Sanitiser and the nasal sanitiser balm.

"We are also grateful to Dr Martin and GICC LCC for granting Holista the distribution rights for Path-Away(R) to include the UK and Europe. We are excited to collaborate Dr Martin's team in the North American market on the Natshield(TM) Sanitiser," he added.

Under the leadership of Dr Martin, a trained engineer, GICC LCC has also developed a set of equipment and processes that helps deploy Path-Away(R) in buildings such as airports, transportation hubs, hospitals, schools and factories to improve the quality airflow. The solution involves pumping mists containing Path-Away(R) into the air condition and ventilation systems to destroy the deadly pathogens present in such enclosed public spaces.

It has been used for over a decade in various countries and market segments to prevent illness and to increase productivity.

Holista will now exclusively represent this technology in the Asia Pacific region except for China, Macau, Hong Kong and Taiwan.

As announced to the ASX earlier this month, the Company has successfully raised just over $2,600,000 since the start of 2020, utilising the Acuity Capital Control Placement Agreement (CPA) facility. This funding will provide the capital to develop the nasal sanitising balm, grow existing regional markets as well as new European markets without disrupting business operations.