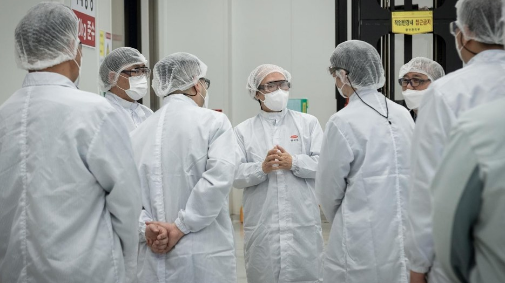 Korea National Institute of Health (KNIH), Korea's top research center in the field of hygiene and medicine (with Kwon Jun-Wook as President) conducted a field inspection of key companies with mRNA technology.

KNIH disclosed on July 1 that as the first company for this field inspection, it visited Hanmi Fine Chemical, which is a subsidiary of Hanmi Pharmaceutical Group and specializes in pharmaceutical products and conducted the verification of technical capability of Hanmi which recently succeeded in the synthesis of six types of mRNA core materials.

Kwon, President of KNIH, confirmed the mass production capability of six type of mRNA core materials, which Hanmi Fine Chemical succeeded to develop recently during the research which started late last year and the potential of Hanmi as Korea's vaccine production hub. He asked Hanmi to continue the research and development to help Korea secure national sovereignty in the production of vaccines.

On the other hand, in this inspection, it was found that Hanmi Science is in the process of participating in WHO's plan of constructing regional hub for the worldwide supply of vaccine.