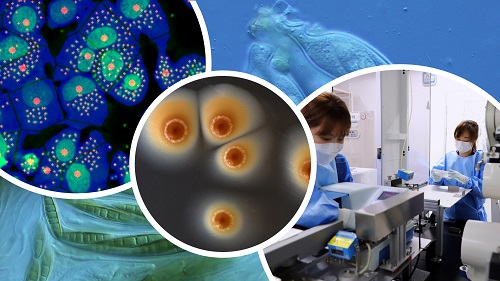 Leishmaniasis and Chagas disease are neglected tropical diseases (NTDs) that cause thousands of deaths worldwide each year. They primarily affect poor and marginalized communities in developing countries but are an emerging health problem in developed countries as well. New therapeutic solutions are urgently needed for both diseases given the many drawbacks of current treatments, including increasing drug resistance and undesirable side effects.

The MEDINA-DNDi-IPK joint project addresses this challenge by exploring the chemical diversity of MEDINA’s vast microbial natural product libraries, using the whole-cell phenotypic screening assays of Institut Pasteur Korea. In addition, a new image-based “parasite painting” assay with cutting-edge cell imaging technology will be developed at Institut Pasteur Korea to identify new modes of action of novel compounds and to select the most promising compounds for further development.

The three-year funding from this highly competitive program from La Caixa reinforces the ongoing collaboration between three global leaders. Coordinated by Fundación MEDINA, the project will leverage existing preliminary data from the established partnership and take advantage of the joint expertise of the consortium, which brings together a centre of excellence in natural product drug discovery (Fundación MEDINA), a pioneer in image-based high-content screening with kinetoplastids (Institut Pasteur Korea), and an international not-for-profit research organization developing new treatments for people living with neglected diseases (DNDi).