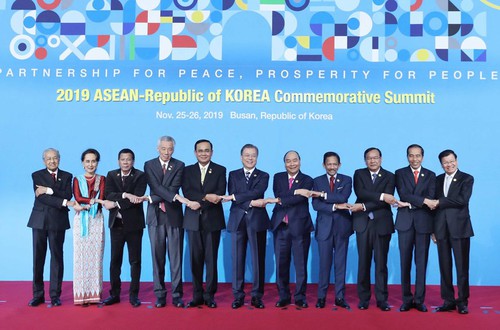 Ministry of Health and Welfare in Korea is  accelerating efforts to build a Republic Of Korea (ROK)-ASEAN dialogue channel in the healthcare sector. The Minister of Health and Welfare met the Secretary General of ASEAN on the occasion of the ASEAN-ROK Commemorative Summit held on Nov 25-26, Busan BEXCO.

The Ministry of Health and Welfare (MOHW) announced that Minister Park Neung- Hoo met Secretary General Lim Jock Hoi of ASEAN on November 26 in Busan, the venue for the ASEAN-ROK Commemorative Summit and discussed building a dialogue channel between ASEAN and Korea in the healthcare sector.

Minister Park mentioned that there has not been an official dialogue channel between Korea and the ASEAN in the healthcare sector, and stressed that a consistent, lasting dialogue channel is necessary to strengthen healthcare cooperation with ASEAN.

Minister Park also emphasized that healthcare cooperation beyond political interests holds great significance, given that life and health is a universal value of mankind and healthy people are the driving force of sustainable economic and social development.

At the bilateral meeting held on the occasion of the Commemorative Summit, Korea and ASEAN discussed details and agendas for the dialogue channel. The official dialogue channel will allow Korea to review cooperation projects with ASEAN on healthcare development and health industry, discuss cooperation agendas that can bring about mutual benefits, and deliver tangible results of cooperation.

At the same time, both sides have acknowledged the need for cooperation in the social welfare sector including through private sector exchange such as food banks and establishment of the social security system. Secretary General Lim Jock Hoi expressed appreciation for Korea’s efforts to expand cooperation with ASEAN and promised full cooperation from the ASEAN Secretariat.

Minister Park stated that strengthening ASEAN-ROK cooperation in the healthcare sector will also serve as the driving force of the New Southern 2.0 for co-prosperity of the Korea and ASEAN.