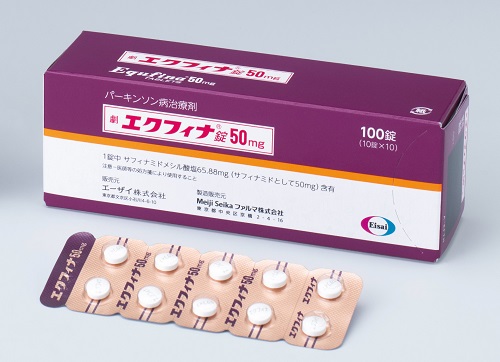 Tokyo headquartered Eisai Co., Ltd. announced that it has launched the Equfina® 50mg TABLETS (safinamide mesilate, “Equfina”) for the indication of improvement of wearing-off phenomenon in patients with Parkinson’s disease under treatment with a drug containing levodopa in Japan.

Manufacturing and marketing approval of Equfina were obtained on September 20, 2019, and Equfina was included to Japan’s National Health Insurance Drug Price List on November 19, 2019.

Equfina, developed by Meiji Seika Pharma Co., Ltd. in Japan, is a once-daily oral treatment for Parkinson’s disease, and is selective and reversible monoamine oxidase B (MAO-B) inhibitor helping to maintain the density of endogenous dopamine and exogenous dopamine from levodopa-containing drugs in the brain (dopaminergic mechanism).

In addition, Equfina blocks voltage-dependent sodium ion channels and inhibits glutamate release (non-dopaminergic mechanism). In the Japanese clinical studies for Parkinson's disease patient under treatment with a drug containing levodopa, the extension of levodopa’s duration of effect (“on” time) of one hour or more and improvement of motor functions were shown. The improvement effect of the wearing off phenomenon is expected.