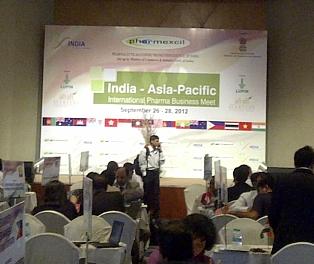 Among the various revelations that were made in event was the fact that the Indian generic drugs are famous throughout the world because of their low-cost and high quality. According to the figures provided by the Director General of Commercial Intelligence and Statistics, Indian exports of drugs, pharmaceuticals and fine chemicals accounted for around $11.5 billion (Rs 63,347 crore) for the period from April 2011-to-March 2012, recording a growth rate of over 30 percent as compared to the previous year.

Furthermore, since 2007-08, exports in this sector have grown by a compound annual growth rate (CAGR) of 20 percent. This segment is the sixth largest exported principal commodity of the country accounting for 4.34 percent of India's total exports. The organization, aims to promote this lucrative sector further, and has in this effort sponsored the 70 delegates from 15 nations in the Asia Pacific.

In an interview with BioSpectrum, Dr P V Appaji, director general, PHARMAEXCIL, told that "We are happy to share that we are enjoying excellent rapport with drug regulators in India and with companies and various pharma giants throughout the country and we will continue to assist them with the export of their drugs. Through this three-day meet, we hope to create more business for our pharma companies that will boost this industry further."