Apomorphine, available both as injections and infusion pumps, is manufactured by Britannia Pharmaceuticals of the UK. 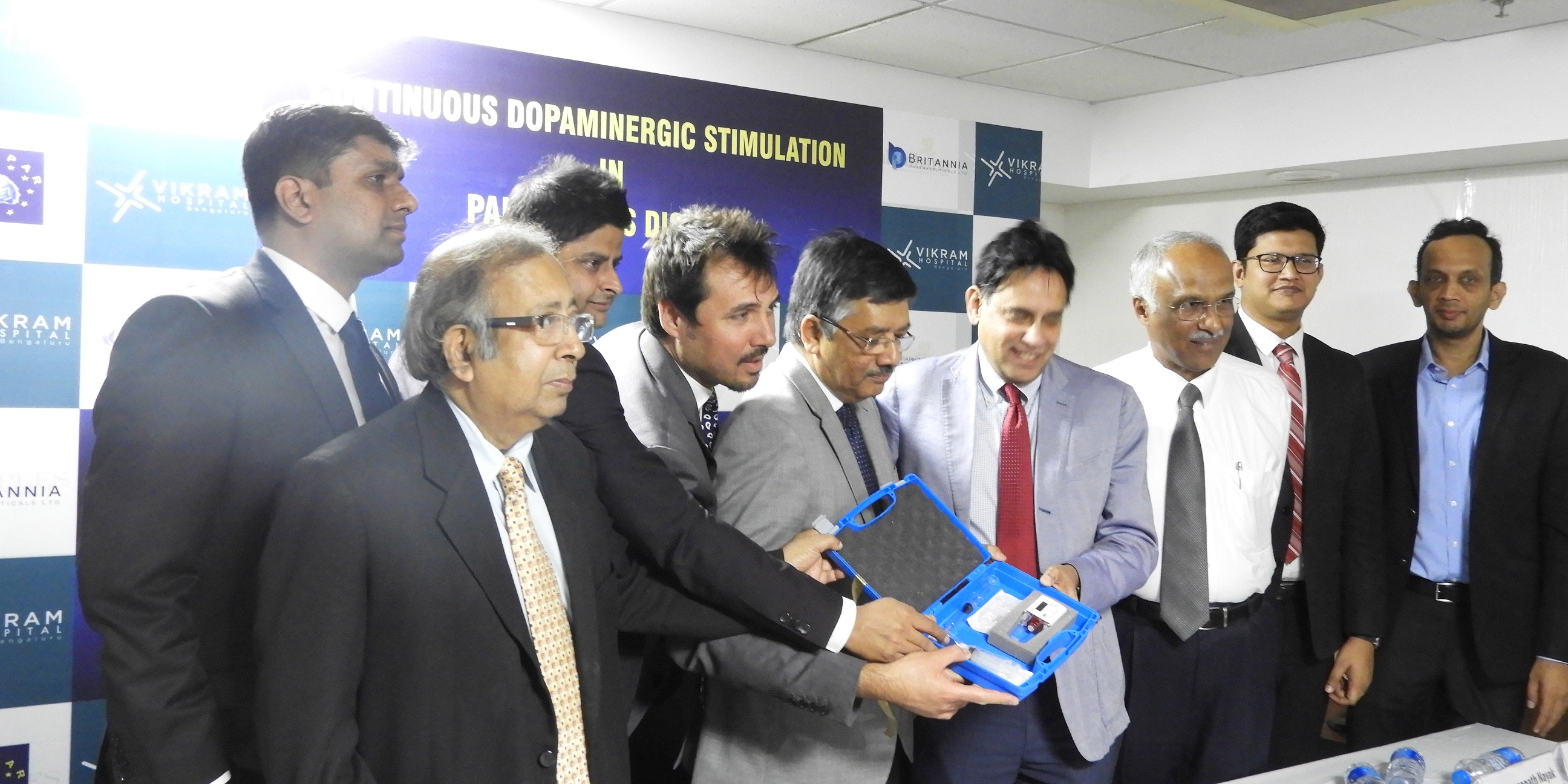 In a boon to patients in the middle stages of Parkinson’s Disease, Vikram Hospital Bengaluru, in association with the UK-based specialty pharmaceutical company Britannia Pharmaceuticals, has launched Apomorphine for the first time in India. This powerful new drug stimulates the production of dopamine by nerve cells in the brain, providing quick and effective relief to patients and improving their quality of life. Apomorphine, available both as injections and infusion pumps, has been popular in the West for over 15 years in the management of Parkinson’s, but Indian patients could not benefit from it until now.

Said Dr. Prashanth LK, Parkinson’s Disease & Movement Disorders Specialist, Vikram Hospitals, Bengaluru: “Currently in India, patients of Parkinson’s have only two options: either oral treatment for the early stages of the disease, or very expensive Deep Brain Stimulation (DBS) surgery for advanced stages. There was no treatment for the middle stages of the disease. Most patients in India cannot afford DBS. This procedure is also not a choice for all ages or stages of Parkinson’s Disease. Apomorphine is recommended for patients who have started to have motor fluctuations – that is, the effect of oral medications is not lasting long enough for them. It is an effective alternative for patients who are not the right candidates for DBS, or those who do not want to undergo surgery yet. Introduction of apomorphine in India has given an important medical option to doctors in the middle stages of the management of Parkinson’s Disease and improve the quality of life of patients.”

Talking about the availability of Apomorphine in India, Dr. Somesh Mittal, CEO, Vikram Hospital, Bengaluru, said: “Apomorphine, a highly selective dopamine receptor stimulator, is a long-awaited boon for patients of Parkinson’s Disease. It is not an OTC medication but has to be taken under the supervision of a Movement Disorder Specialist at specialized centres. Since the drug has just been launched in India, it will initially be distributed through select centers where well-trained movement disorders specialists are available. In due course, we aim to increase the distribution footprint to cover almost all movement disorder centers and neurology clinics across the country. Vikram Hospital Bengaluru will remain the major center for the availability and distribution of Apomorphine for the foreseeable future.”

Said Dr. Vinod Metta, Consultant Interventional Neurologist & Movement Disorders Specialist, King’s College & Imperial Hospitals, London, who is leading one of the biggest sets of patients on Apomorphine in the United Kingdom: “Parkinson’s is a special neurodegenerative disorder for which good symptomatic treatment is available, but there is a huge unmet need for therapeutic options in moderately advanced stages. Even though Apomorphine pumps and pens for continuous medication release have been available in Western countries, they were not yet launched in the Indian market. Apomorphine pens are similar in usage to insulin pens. They work dramatically by giving relief to patients within a couple of minutes, in contrast to other treatments for Parkinson’s which take anywhere from 30 minutes to 1 hour to show their effect. The launch of these therapies was long overdue for Indian patients. These will significantly benefit patient care and reduce the burden of caregivers.”

Said Dr Shivam Om Mittal, Parkinson’s Disease & Movement Disorders Specialist, Vikram Hospitals, Bengaluru: “The current prevalence of Parkinson’s Disease in India is around 300-400 out of 100,000, which is expected to more than double by 2030. It will be a major non-communicable degenerative disorder along with dementia to burden the healthcare system of India. Though majority of the patients are above 50 years of age, no age group is immune to Parkinson’s Disease. Of late, its incidence in younger population is also on the rise.”

He added: “The symptoms of Parkinson’s include slowness in daily activities, stiffness of muscles, a change in walking style and tremors of the hands. Many people can also have non-motor symptoms preceding the motor symptoms such as reduction in the sensation of smell, constipation, and shouting, yelling or enacting in sleep. Some of these symptoms can be present for as many as 20 years before clinical symptoms like tremors appear. Dopamine imaging is an effective test to see if suspected patients have Parkinsonism, but it is available only in select centers.”

Said Dr. Prashanth LK, Parkinson’s Disease & Movement Disorders Specialist, Vikram Hospitals, Bengaluru: “Medical therapies can bring significant improvements in the symptoms of Parkinson’s.  These medications are meant to increase the supply of dopamine which gets depleted in the body of a Parkinson’s patient. Surgical therapies like Deep Brain Stimulation are available too. Parkinson’s patients need to take medications at timely intervals, which often leads to fluctuating levels of medication in their bodies and irregular benefits. Continuous Dopaminergic Therapy is a method by which the body receives dopamine on a regular and consistent basis, because of which fluctuations associated with medications are negated significantly. With the launch of Apomorphine injections and infusion pumps by Vikram Hospital, Indian patients can now benefit from Continuous Dopaminergic Therapy which till now was only available in Western countries.”