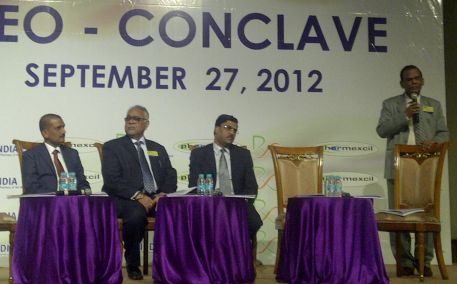 Hyderabad: Innovation and government support are key to reach the $25 billion export target set by the India government for the pharmaceutical sector. Heads of major pharma companies, who gathered for the CEO Conclave of the India Asia-Pacific Pharma Business Meet 2012, a networking meet held by the Pharmaceutical Export Promotion Council of India (PHARMEXCIL), said the government should boost its support to help them reach the target by 2014-15 from the current exports of $ 13.5 billion. The event was held in Hyderabad, a city in the southern part of India.

According to them, target is tough but achievable. The CEOs of various pharma majors, such as Shasun, Ranbaxy, Suven and Vimta Labs, came to this conclusion that the target of $25 billion can be achieved provided that the government took some policy measures and ensured support.

Mr J S Deepak, assistant secretary of Commerce Ministry, defended the target and said, "We know that the pharma industry has stood against all odds and have delivered in the past. That is the reason we have set this benchmark of $25 billion for 2014. The target is challenging but certainly achievable."

The panel, which comprised companies from drug discovery to development, were not apprehensive about reaching the target. The moderator, Mr Venkat Jassi, said "This was the target meant for 2020... But yes, seeing the past, we can certainly try and reach this target set by the government."

"To achieve this target, innovation has to be driven through science. We will require the assistance of both the government and the industry. However, to reach $25 billion, we can't just rely on the exports. Sales have to come from the country as well, and for that policies need to be framed in such a way. The government can intervene in areas where it is difficult to travel. The market there is huge but we are stopped by travel hurdles. The government should solve these problems by talking to the governments of these countries," said Mr Ranjan Chakravarti, senior vice president - Global Strategy, Ranbaxy.

Mr S Abhaya Kumar, managing director, Shasun, mentioned that countries such as Japan are looking for generic supplies and APIs from India. "The requirement for NCE molecules are also high from India. However, we need to upgrade our quality and work for regulatory compliance which, I feel, is the biggest challenge here," he said.

The panel also unanimously favored the establishment of a centralized pool to assess regulatory compliance by the small and medium enterprises.