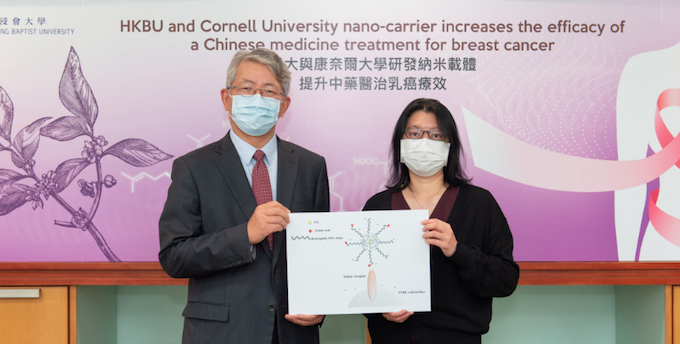 A group of researchers from Hong Kong Baptist University (HKBU), in collaboration with Cornell University in the US, has developed a novel targeted therapy for triple-negative breast cancer (TNBC) that uses a specially-designed nano-carrier to deliver the Chinese medicine compound gambogic acid (GA).

The invention enhances the anti-cancer effect of GA and reduces its damage to off-target organs. It has the potential to become a more effective therapeutic option for TNBC.

GA is a herbal compound isolated from a dry, brownish resin called gamboge, which is derived from Garcinia hanburyi, a plant with a long history of medicinal use in Southeast Asia. Previous studies have shown that GA can inhibit the growth of cancer cells.

However, its clinical application is limited by the fact that it is rapidly eliminated from the circulation system and has poor water solubility, which makes it difficult for GA to reach the cancer cells. Furthermore, high dosages of GA can cause damage to off-target organs due to its toxicity.

When compared with free GA, the GA delivered by the nano-carrier caused less damage to the off-target organs of the mice including their hearts, livers and lungs. It also caused minimal damage to their kidneys and spleens as relatively low levels of GA were detected in these two organs.