The invention offers hope for early detection and large-scale routine screening of AD. 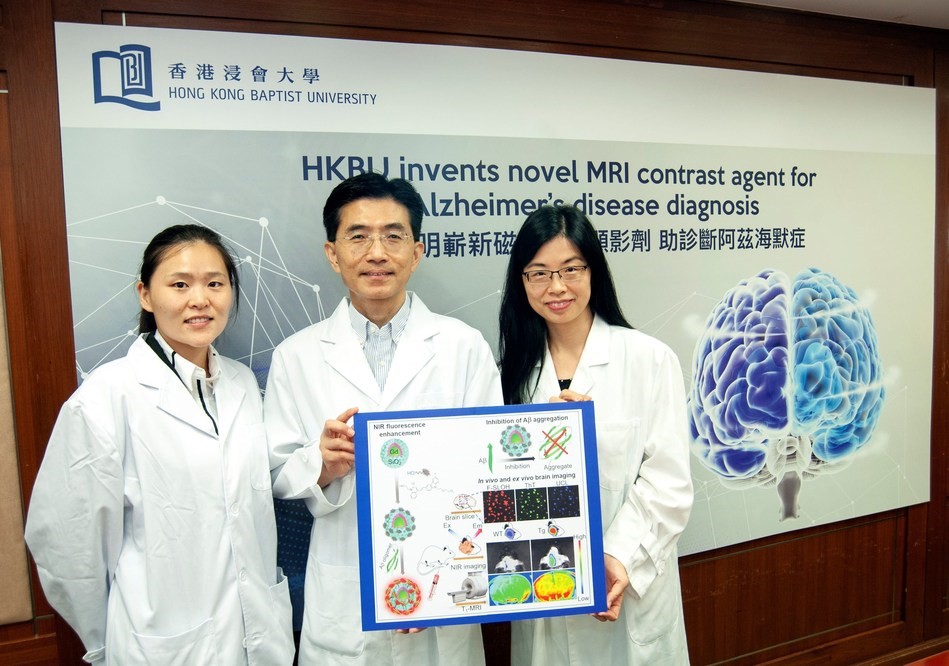 Hong Kong Baptist University (HKBU) scientists have recently invented a novel contrast agent for magnetic resonance imaging (MRI), which enables real-time visualization and detection of the size and number of amyloid-beta in the brain, a main hallmark of Alzheimer's disease (AD). The invention offers hope for early detection and large-scale routine screening of AD.

AD is a chronic neurodegenerative disease that constitutes 60 to 70 per cent of dementia cases. It is characterised by the abnormal accumulation of amyloid-beta (Aβ) in the brain.

A positron emission tomography (PET) scan is currently the clinical method used to visualise Aβ. But this method is expensive, invasive and radioactive, with limited image resolution. MRI is a more widely used clinical imaging tool. However, at present there is no clinically approved MRI contrast agent available for the real-time imaging of Aβ in human brains.

A research team led by Professor Ricky Wong Man-shing and Professor Li Hung-wing, Professors of the Department of Chemistry at HKBU, has created a novel nanomaterial for Aβ imaging. It loads and coats gadolinium-based nanoparticles, a chemical substance commonly used as an MRI contrast agent, with a specially designed silica layer that can accommodate a proprietary, non-cytotoxic fluorescent cyanine dye. The cyanine dye is an organic compound used to visualise and quantify Aβ proteins.

In the mouse model experiments, HKBU researchers injected the modified nanoparticles into both transgenic mice with over-expressed Aβ and mice of the control group. MRI of their brains showed that the magnetic signals were stronger and longer in the transgenic mice, which proved that the modified nanoparticles had passed through blood-brain barriers to bind with Aβ contents in the brain.

Clinical observation showed that the size and number of Aβ spots in human brains increase with the age of AD patients. In line with this, the research team observed that the brightness of the brain sections of transgenic mice increased with their age, and their magnetic resonance signal intensity was generally higher than that in the mice of the control group. More bright spots were also found in older transgenic mice whereas almost no bright spots could be seen in the mice of the control group.