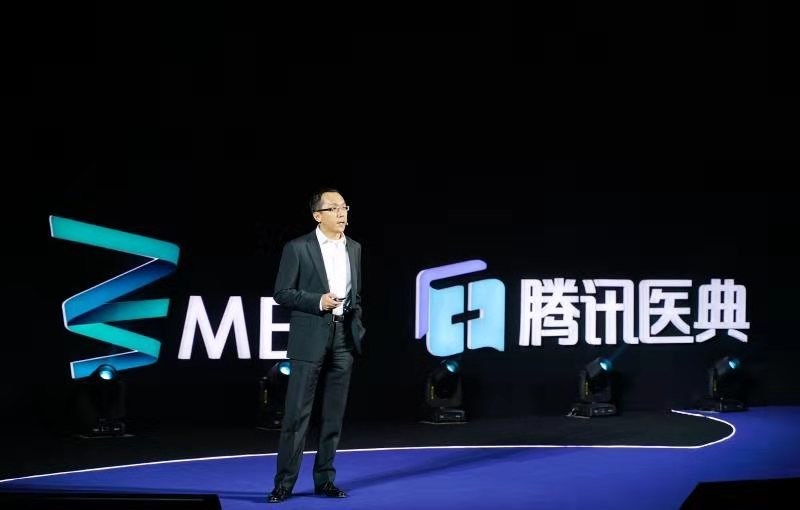 “Tech for good” is the vision and mission of Tencent, which believes that progressive technology can help humans unlock the mysteries of life.

“We can provide an open platform and with the wisdom of experts and the power of Internet technology, we can jointly build a bridge of trust between physicians and the public," Zhang, told the press from Asia on the eve of the 2019 Tencent Medical ME summit in Beijing. Later, in the summit he also made a keynote presentation on ‘The new medical science lighthouse’.

Cardiovascular diseases (CVD), stroke and other chronic diseases are the major health threat in China. Particularly, CVD prevalence and mortality rate is continuously growing. “Chronic diseases is a major cause of deaths in China accounting for 73 per cent of total mortality. When deaths caused by chronic diseases are reducing in US, it is rising in China,” said Dr Xiao Ruiping, Dean, Institute of Molecular Medicine in Beijing university, and Deputy Editor of NEJM, in her presentation.

She narrated how the team led by her has found the factor that encourages type 2 diabetes and CV complications. The team has developed an antibody which can reduce the concentration of that factor in the blood. Dr Ruiping dealt with the topic of clinical research. “It has improved significantly in China in recent years.

“We aim to introduce the most advanced international medical research and clinical practice to China. No of clinical studies in China has increased due to government support and 4 per cent of the studies now are conducted in China. This is important not only for the use of medical experts, but also for the benefit of general public who can access the information through reliable science platform,” she added.

The point of reliability of information was also dealt with by Meng when told the press that medical science should be based on rigour and precision as the first principle. “Tencent has joined hands with WebMD to obtain exclusive Chinese rights of over 60,000 pieces of medical content. That has been combined with doctors’ professional knowledge and presented in text, animation, video format, to make it easy to understand to the patients,” added Meng.

Tibor Kovacs, President, European Society of Oncology, presented an interesting relationship between the research in the medical field in a country and the health of the population. “More the academic publications, lower the mortality rate in cancer,” he pointed out and informed the audience that only 10 per cent of the China’s 400 research papers in Oncology journal were published.

Envisioning the future, he said engineers will have to be part of surgical teams in near future as lot of technology will be involved in healthcare. There will be more use of AI, minimally invasive surgeries will be done using robots, there will be digital medicines, virtual clinics, lot of data analyses will be required to be done and doctors will have to get adopted to these developments.

Dr Li Taisheng, Director, Dept of Infectious Diseases, Beijing Medical College Hospital, presented the case of AIDS. He is involved in developing a new plant medicine to treat AIDS, the clinical trials for which will begin next year. “The current anti-viral treatment has controlled the disease spread in China with decrease in the number of new patients by 16 per cent and in death by 33 per cent from 1020 till today,” informed Dr Taisheng in his presentation. The mortality rate is to be reduced drastically by over 85 per cent in next decade, he said, making AIDS only a chronic disease.

Be it AIDS or liver cancer or any other disease, early and specific diagnosis is the key for cure of diseases was a common point made by the experts. “Liver cancer is not an incurable disease. Early screening and diagnosis is crucial in cure,” pointed out Dr Zhu Xiuxuan, Director, Liver Research Centre, Massachusetts General Hospital.

He warned that the world’s half of the liver cancer patients are in China. But he showed hope by describing various kind of treatments available in China for liver cancer. Precision medicine and target therapy have shown improved results increasing the survival rate.

The summit also included the presentation on mental illness as Dr Michael Phillips, Consultant, WHO’s Mental Health Department. Talked about complexities in suicide rates measured in urban rural areas or gender wise or age groupwise. Almost 70 per cent suicides are attempted consuming pesticides, Dr Phillips said adding that interesting part is that one third of those who commit suicides were not suffering from any mental illness.

Fei Lipeng, Director of the Suicide Crisis Intervention Research Office, Shanghai Mental Health Center, said decrease in suicide rate is attributed to economic development of the people and growing urbanisation. He suggested to maintain suicide attempt register to do counselling of those whose suicide attempts fail to prevent them from re-attempts of suicide.

The summit can be summerised in the words of renowned Italian oncologist Umerto Veronasi, quoted by Dr Kovacs in his presentation as “The surgeon should not only act as a technician but as a real scientist, being able to understand the results of basic and clinical research beyond the surgical domain” for the scientific advances in medical science to continue to resolve more mysteries.