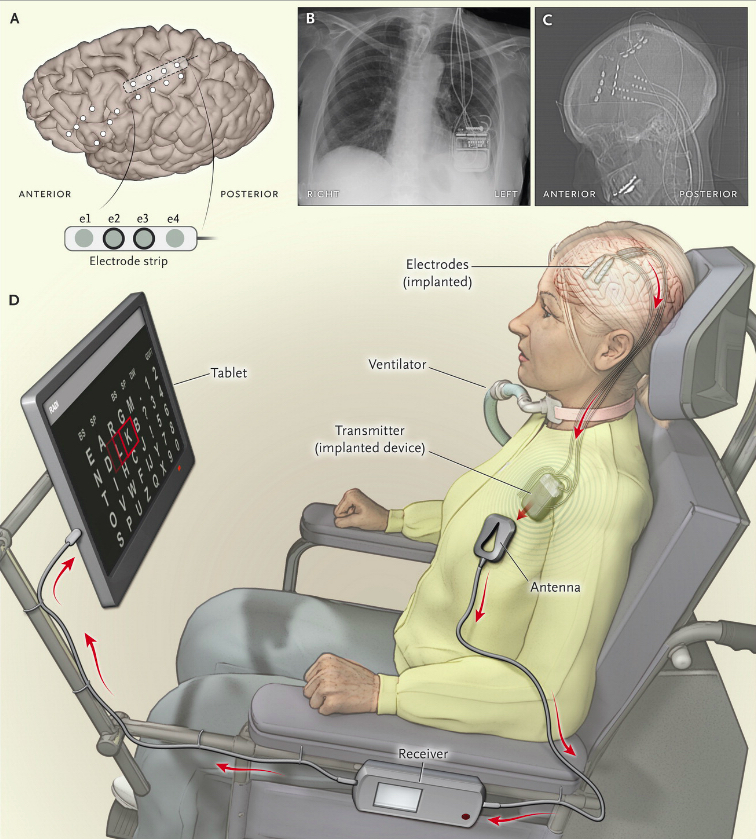 The University Medical Centre (UMC) Utrecht in the Netherlands is breaking new ground with a brain-driven speech computer that looks to assist patients suffering from paralysis, with communication. The technology has since been tested on a 58-year-old patient left completely immobile by amyotrophic lateral sclerosis (ALS), helping her communicate at home with her family and caregivers.

Electrodes, tasked with picking up brain activity, were first placed on the patient's brain, while a transmitter was placed in her body under her collar bone. This transmitter receives the signals from the electrodes via subcutaneous wires, amplifies them and transmits them wirelessly to a speech computer. Through intensive training, the patient learned to send signals by moving her fingers in her mind and selecting letters on the computer screen - not dissimilar to how a computer mouse is operated. Selected alphabets light up and eventually form words, which are then voiced by the computer.

Nick Ramsey, professor of cognitive neuroscience at UMC Utrecht, says, "This is a major breakthrough in achieving autonomous communication among severely paralysed patients whose paralysis is caused by ALS, a cerebral haemorrhage or trauma." Given its enabling effect, the technology can potentially be a great tool for patients to overcome the isolation resulting from their incapacity for speech.

For years, the UMC Utrecht's Brain Center has worked on the possibility of controlling a computer by means of electrodes that capture brain activity. One of the largest academic centres in the Netherlands, UMC Utrecht initiates approximately 140 clinical research projects each year, with the long-term aim of providing patients with the latest available expertise and innovative technological solutions. Up till the recent introduction of this new technique, research laboratories have only tested brain-driven speech computers measured with a bathing cap fitted with electrodes. The use of invisible, implanted electrodes to operate a speech computer is thus unique.

If the implant proves successful for three people, then a larger international trial could be launched. "We hope that these results will stimulate research into more advanced implants, so that someday not only people with communication problems, but also people with paraplegia, for example, can be helped," adds Ramsey.