Olympus launches ENDO-AID, an AI-powered platform for Its endoscopy system

A first step towards the future of endoscopic diagnosis and therapy 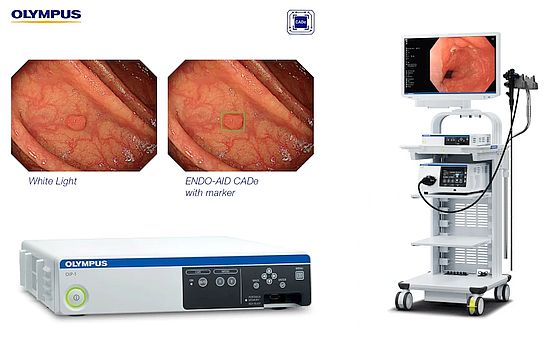 Olympus's latest endoscopy system, EVIS X1, was developed to set new standards for image detection, characterization, staging, and treatment. With the newly introduced endoscopy CAD (computer-aided detection/diagnosis) platform ENDO-AID, Olympus is now enhancing the capabilities of EVIS X1 through AI technology, aiming to elevate the standard of endoscopy around the world - whether for applications to disorders of the esophagus, stomach, colon or other gastrointestinal organs.

ENDO-AID CADe is an application for computer-aided detection powered by AI which runs on ENDO-AID. It uses a complex algorithm via a neural network developed and trained by Olympus. With this new application, the system's sophisticated machine learning can alert the endoscopist in real time when a suspected colonic lesion (such as a polyp, malignant neoplasm or adenoma) appears on the screen.

ENDO-AID CADe was developed toward the following improvements:

> Improved observational performance in adenoma detection: By providing visual support, ENDO-AID CADe aims to improve the observational performance of the endoscopist's adenoma detection.
> Support of the colonoscopy screening process: The system provides visual support during screening, allowing the endoscopist to focus on any abnormalities indicated by the software regardless of the experience level of the endoscopist.
> Efficient endoscopy operation: Due to the simple and intuitive display of lesions, ENDO-AID CADe has the potential to make endoscopy easier and more efficient for the endoscopist by reducing the need for excessive eye movements.

With ENDO-AID, the latest feature of the EVIS X1 endoscopy system, Olympus has created the basis and infrastructure for the installation of future applications supported by AI.

There is a positive impact of an increase in adenoma detection rate (ADR) on the prevention of colorectal cancer (CRC). Supporting the identification of lesions, ENDO-AID CADe is designed to increase ADR. Olympus is aiming to increase the quality of CRC screening and its preventive efficacy against CRC. The prevention of CRC is a core element of Olympus' endeavors in medical endoscopy and beyond.

During the virtual UEGW from October 11 to 13, ENDO-AID will be presented to the public for the first time. ENDO-AID is initially and commercially being launched in Europe beginning in November, followed shortly afterwards by some Middle Eastern, African and Asian-Pacific countries. Japan, the Americas and China markets will follow at a later time after complying with laws and regulations in each region.