Mark Griswold, Peter Jakob have been honored in the Open Innovation category at the recent award ceremony held in Munich. 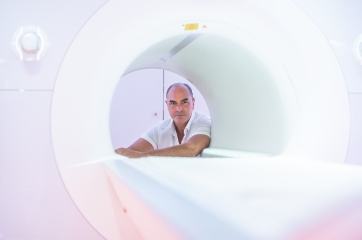 With the new parallel imaging method CAIPIRINHA, Mark Griswold, Peter Jakob and their colleagues have taken the technology of magnetic resonance imaging (MRI) a huge step forwards. Siemens Healthineers uses the technique under a license agreement in many MRI scanner models. Both researchers have been honored in the Open Innovation category at the recent award ceremony held in Munich. Siemens has been presenting the Inventors of the Year award annually since 1995 to outstanding researchers and developers.

The acronym stands for Controlled Aliasing in Parallel Imaging Results in Higher Acceleration (CAIPIRINHA). To accelerate scanning, the images are composed of separate slices superimposed on top of each other and captured simultaneously. In this way, CAIPIRINHA intelligently refrains from using a certain amount of data, which is subsequently computed with the help of algorithms. “It’s a combined data acquisition and reconstruction method that allows the images that were taken at the same time to be separated again, which greatly improves their quality,” explains Peter Jakob, professor of experimental physics at the University of Würzburg.