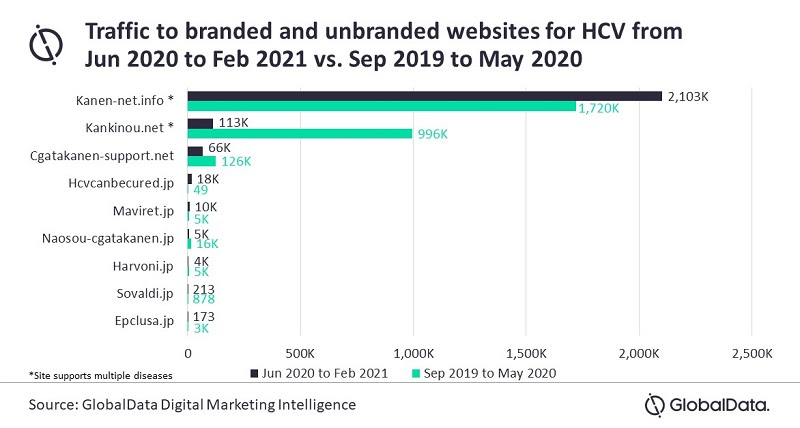 The hepatitis C virus (HCV) therapeutics market in Japan is highly competitive with stiff competition between Gilead and AbbVie. However, AbbVie has taken an edge over Gilead in terms of HCV-related digital initiatives, finds GlobalData, a leading data and analytics company.

Venkat Kartheek Vale, Pharma Analyst at GlobalData, comments: “Japan had a high prevalence of HCV, which led to the increased uptake of marketed DAAs by AbbVie and Gilead due to high cure rates. While high cure rates are going to reduce the diagnosed prevalent cases and subsequently decrease the market size, AbbVie and Gilead are still trying to leave no stone unturned to sustain their presence and dominate the market by offering branded and unbranded digital support for patients.”

An analysis of the traffic over the last 18 months (June 2020 to February 2021 vs. September 2019 to May 2020) revealed highest traffic to the unbranded websites of BMS’ ‘Kanen-net.info’ and Mitsubishi Tanabe’s ‘Kankinou.net’ that support multiple liver diseases, followed by AbbVie’s dedicated unbranded site for HCV, ‘Cgatakanen-support.net’. Among the branded websites, AbbVie’s ‘Maviret.jp’ received higher traffic than Gilead’s branded websites.

Mr. Vale concludes: “The HCV treatment landscape witnessed a major transformation with the launch of novel DAAs by Gilead and AbbVie in the recent years with their drugs showing high cure rates thus making the companies the current market leaders. AbbVie’s digital initiatives to support Maviret have helped the company to position itself above Gilead, which has three marketed products including the recently approved Epclusa. Hence, an increased focus on strengthening digital presence is required from Gilead to compete with AbbVie.”