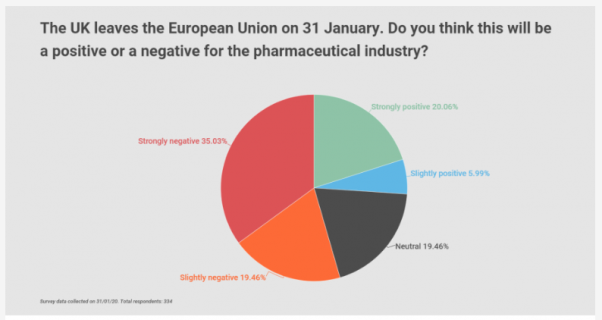 Readers of GlobalData’s Pharmaceutical Technology have been voting for whether Britain’s exit from the EU and into an 11 month transition period will be positive or negative for the industry.

GlobalData’s pharmaceuticals writer Allie Nawrat says: “Although 35% of respondents believe Brexit will be strongly negative for the sector, the next highest result was the opposite – strongly positive – with 20%.

“At 11pm GMT on 31 January the UK leaves the European Union (EU). However, under the terms of the ratified Withdrawal Agreement, this simply means the UK will enter an 11 month transition period during which it will negotiate its future relationship with the EU.

“In the lead up to Brexit day, Pharmaceutical Technology surveyed readers their view of whether the UK leaving the EU will be positive or negative for the pharma sector.

“Results show a pessimism from the sector, with 35% of the 334 voters stating leaving the EU will be strongly negative for the pharma industry. However, the vote was not fully conclusive, with 20% of respondents stating they were strongly positive about the impact of Brexit on the pharma industry – this is consistent with the majority of pharma industry professionals saying a Conservative Party government would be best for the sector in a December Pharmaceutical Technology poll.

“Almost exactly the same strongly negative results were seen for the medical device industry, demonstrating how intertwined concerns of these two, very closely related sectors are.

“Since the 31 January only marks the beginning of the Brexit transition period, there is still significant uncertainty about how negotiations with the EU will progress and the impact these will have on pharma products. Until some of this uncertainty is alleviated, it will be difficult for pharma to view Brexit in a positive light.”