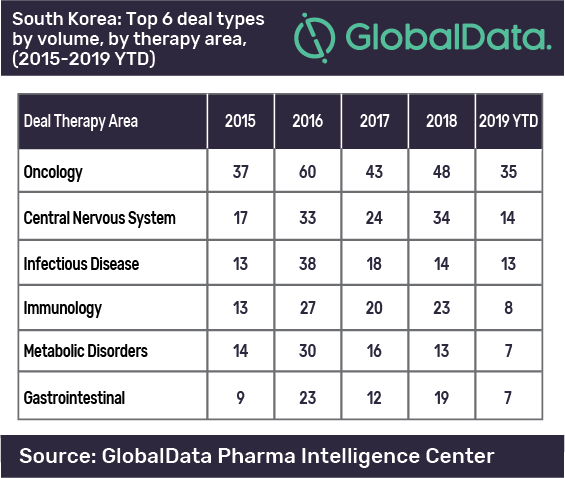 South Korea’s plans to invest more than US$1.7bn in its biotechnology and biopharmaceutical sectors over the next five years will attract foreign investment as pharmaceutical market growth is set to increase from nearly US$19.5bn in 2018 to more than US$23.2bn by 2022, says GlobalData, a leading data and analytics company.

Prashant Khadayate, a Pharma Analyst at GlobalData, says: “The latest move is consistent with the country’s current four-year plan, which aims to position the country as global biotech and medical industry hub by investing more on research and development (R&D). However, latest investment focus is more towards biotechnology and biopharmaceuticals sectors and not the medical industry.”

GlobalData’s research reveals that a number of deals within key therapy areas in South Korea’s pharma/biotech space have followed an increasing trend between 2015 and 2018. The potential for biopharmaceutical development is very high in these areas, which include oncology, gastroenterology and immunology.

South Korea’s Celltrion and Samsung Bioepis have already established their stronghold in the race for the development and commercialization of biosimilars. Moreover, the world’s first stem-cell therapy was produced in the country, and it currently produces four out of the seven globally commercialized stem-cell therapy products.

Khadayate concludes: “The South Korean government is supporting its strategy to become global biotech by using its excellent infrastructure and workforce, along with top-level clinical study capacity and IT platform. This will further support new collaborations in the overall pharma space.”