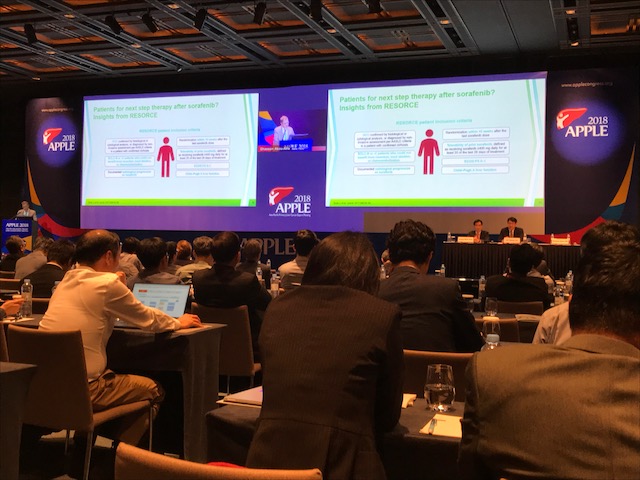 Singapore – Bayer announced results from the Asian analysis of OPTIMIS, the first prospective real-world study on treatment patterns in hepatocellular carcinoma (HCC) or advanced liver cancer, the third leading cause of cancer deaths in the Asia-Pacific region. The study results indicate that real-world use of transarterial chemoembolization (TACE), a common treatment for inoperable HCC, appears to deviate from international and regional treatment guidelines 1,2,5,6. A significant proportion of HCC patients in Asia continued to be treated with TACE, despite ineffective responses (generally referred to as TACE ineligibility or failure). The results also suggest that following TACE ineligibility, systemic therapies were not commonly used in real-world setting in Asia. These important findings were presented for the first time at the 9th Asia- Pacific Primary Liver Cancer Expert Meeting (APPLE) on July 7, 2018, at Grand Hyatt Seoul, Korea.

Overall, the OPTIMIS study enrolled 1,650 patients globally for whom a decision to treat with TACE was made at the study entry. Among them are 1,134 patients from Asia including China, Japan, Korea, Taiwan, Thailand, Singapore, Vietnam, Indonesia, Pakistan and India. 38% of these patients were TACE ineligible at inclusion according to study protocol-specific criteria, reflecting different local and international guidelines from medical societies. In patients who became TACE ineligible during the study, less than 10% of them received approved systemic treatment like Nexavar early following TACE ineligibility. After the first TACE, liver function deterioration was noted in both the acute and chronic periods across all assessed liver parameters. The proportion of patients having a tumor response declined with subsequent TACE treatments.

Dr Han Chu Lee, principal investigator of the OPTIMIS study in Asia, and professor at Department of Internal Medicine, Asan Medical Center, Seoul, Korea said, “In real-world practice, too many HCC patients in Asia are treated with TACE despite not being adequately indicated. The heterogeneity of TACE use across Asia calls for a global consensus on appropriate TACE use. The data also highlight the importance of careful patient selection as prescribing TACE to unsuitable patients may be harmful, and can impact patients’ liver functions and prevent them from receiving and benefitting from subsequent treatments.”

Existing treatment guidelines recommend alternative therapy options including systemic therapies to be considered following TACE failure. Nexavar is a first-line systemic treatment for advanced HCC approved in many Asian countries. In the global study, a trend towards a longer overall survival (OS) was observed in patients with an early start of Nexavar versus patients without at the time of TACE ineligibility. Due to low patient numbers, OS was not analyzed in Asian population.