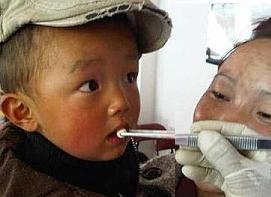 Singapore: The World Health Organization (WHO) has confirmed China's polio-free status following the country's successful control of the outbreak that occurred in 2011 in Xinjiang Uyghur autonomous region. With this confirmation China and the whole western Pacific region retains its polio-free certification status. With high quality surveillance, China has reported no further polio cases for over 12 months.

"We are here again as the polio virus crossed over the mountains from Pakistan into Xinjiang province in 2011. Our task is to assess the impact of that importation on the region's overall polio-free status and China's response," said Prof Anthony Adams, chairman of the Regional Commission for the Certification of Poliomyelitis Eradication. "I want to express our admiration for the way China had responded to this importation and recommended that it be an example to the rest of the world on how to respond to similar emergencies."

"The 2011 outbreak, which China quickly stopped with technical assistance from WHO, UNICEF and other partners, underscores that no place is safe until the crippling and fatal disease is globally eradicated," said Dr Michael O'Leary, WHO Representative in China.

According to Ms Gillian Mellsop, UNICEF Representative to China, "An impressive feature of the response was the wide array of stakeholders, including the Bureau of Religious Affairs, the Propaganda, Radio and Television Bureau, local media, village and religious leaders, coordinated by the Ministry of Health with UNICEF and WHO support, to reach the most vulnerable families and children."

Altogether, five large-scale immunization campaigns were conducted in Xinjiang between September 2011 and April 2012. More than 43 million doses of polio vaccine were administered to children and adults under 40 years of age. The Government of China allocated over approximately $55 million (RMB 340 million) to the response effort; with resources provided by different levels of government. To ensure that a similar situation does not re-occur, new strategies and capacities developed during the outbreak will continue to be employed in routine immunization work.