To supercharge Australia's ability to produce vaccines and therapeutics locally 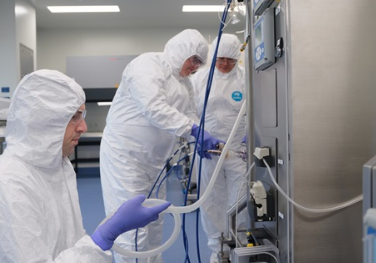 Researchers at CSIRO’s National Vaccine and Therapeutics Lab will turn vaccine and drug candidates into products that can be manufactured in large quantities for clinical trials. The ability to do this in Australia, rather than needing to go overseas, has been the ‘missing link’ in Australia’s biomedical science sector being able to produce vaccines and drugs here.

The new lab follows a successful pilot facility in the early stages of the COVID-19 pandemic, when CSIRO scaled up vaccine candidates that had been developed onshore as part of a national strategy to combat this emerging threat.

The facility was completed with funding from the Federal and Victorian Governments and was officially opened on 11th August by Federal Minister for Industry and Science Hon Ed Husic.