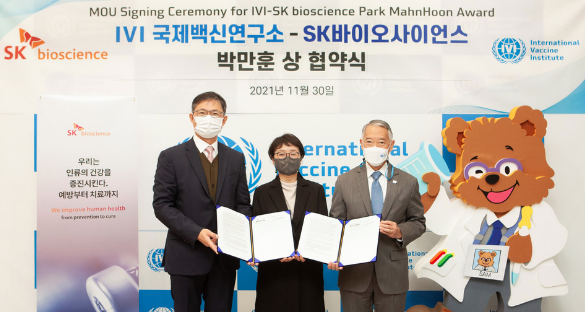 The International Vaccine Institute (IVI) is joining hands with SK bioscience, a leading biopharmaceutical company in South Korea, to launch a “Vaccine Nobel Prize” to award people and organizations who made significant achievements and contributions in the global vaccine industry every year.

The Park MahnHoon Award will select and award Korean and international individuals and organizations that made meaningful contributions to the development of the vaccine industry. The award was named after the late Vice Chairman Dr Park MahnHoon of SK bioscience in honor of his research and development achievements.

In order to launch the Park MahnHoon Award, the two organizations agreed to form a panel of eight leading experts chaired by IVI Director General, which will evaluate individuals or organizations on their contributions to the development of vaccine(s) that reduce the impact of infectious diseases.

SK bioscience will contribute funding for two 100 million Korean won (approx. $85,000) annual prizes to IVI for the awards, and the first award ceremony will take place on April 25, 2022 to commemorate the first anniversary of the late Dr Park’s death.