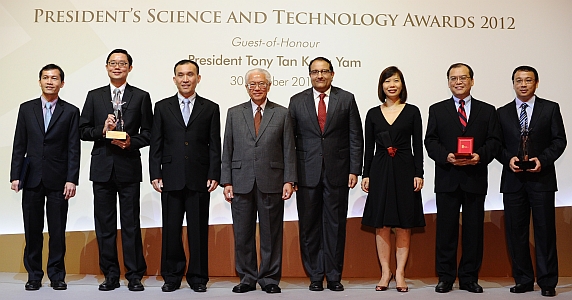 Singapore: Professor Wang Yue from A*STAR's Institute of Molecular and Cell Biology (IMCB) received the President's Science Award for his outstanding research on the human fungal pathogen, Candida albicans, which accounts for a sizable percentage of hospital-acquired infections of the blood in the world, with a high mortality rate of up to 45 percent.

Professor Wang's research was the first in the world to uncover key factors that contribute to the virulence of the fungus. This has opened up new areas of research to better combat infectious diseases as well as pave the way for the development of new therapeutic agents. Translated, all these will significantly reduce the number of hospital acquired infections as well as improve the treatment for those afflicted with the infection.

Professor Wang's discoveries have also led to collaborations with both the private and public sectors, which will result in economic benefits to Singapore, as well as further Singapore's reputation as the biomedical hub of Asia. The President's Science and Technology Awards were given by President Tony Tan Keng Yam at a ceremony held in Singapore. The awards are the highest honours in Singapore conferred on exceptional individuals and teams for their excellent achievements in science and technology

Professor Louis Phee, research scientist and engineer from Nanyang Technological University, and Professor Lawrence Ho, a clinician from National University Hospital have received President's Technology Award for groundbreaking research that led to the successful development of the world's first robotic flexible endoscopy system, which can carry out surgeries with great precision and still be minimally invasive.

Their invention, called the master and slave transluminal endoscopic robot (MASTER), has carried out surgical procedures such as removal of gastric tumours without the need for making external incisions. Successful first-in-man trials conducted in India and Hong Kong have also proven that the use of MASTER results in less pain, faster recovery and no scarring. Professors Phee and Ho have since incorporated Endomaster, a company to commercialise their innovation.

Congratulating the winners, Mr Lim Chuan Poh, chairman of A*STAR said, "The award winners have demonstrated that the R&D community is able to make breakthroughs that impact the economy and society through meaningful complementary and translational partnerships within the community and strategic collaborations with industry."

Ms Ow Foong Pheng, permanent secretary, Ministry of Trade and Industry, and chairman, PSTA main selection committee, said, "The quality of the candidates was very impressive. Increasingly, we are seeing more recipients who are able not only to do good science but also apply their excellent R&D work to transform the economy and meet real needs of society."