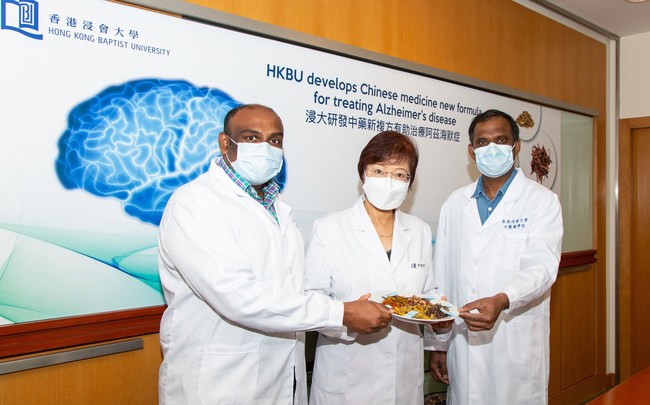 Mouse model experiment results showed that the formula reduces the levels of amyloid-beta (Aβ) and insoluble hyperphosphorylated-tau protein, which are the major hallmarks of AD, in mice brains. It also improves cognitive function and memory in mice.

The research discovery was published in the Journal of Food and Drug Analysis, an international scientific journal.

They also found that Yan Hu Suo in Yuan-Hu Zhi Tong (YZT), a Chinese herbal formula used to treat pain and neuralgia, can regulate the aggregation of tau proteins. They therefore combined the modified HLJDT (HLJDT without Huang Qin) and Yan Hu Suo with two other herbal medicines, namely Dan Shen and Gou Teng, to optimise the formula for AD treatment.

Facilitated by data analysis and modelling techniques, the research team combined the six herbal medicines in different ratios to form 24 different formulas. Three of them were found to be effective in treating Alzheimer's disease in a cell disease model. After conducting experiments on brain permeability and toxicity, the most promising formula was named NeuroDefend, and it was selected for further studies in pre-clinical mouse models to evaluate its efficacy as an AD treatment.

"Traditional Chinese medicine adopts a broad pharmacological approach to treating neurodegenerative diseases by deploying a combination of herbal medicines with different treatment effects. Selection of the six herbal ingredients and their ratios in NeuroDefend is based on the research conducted by our team over the years. NeuroDefend will contribute to the development of novel, effective traditional Chinese medicine for the treatment of AD in humans," said Professor Li.