The company has invested approx. 5 billion yen for this facility. 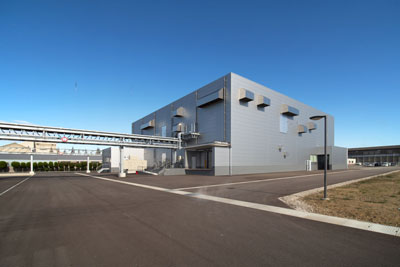 FUJIFILM Toyama Chemical has announced the construction completion of a new manufacturing facility (facility name: 701) within its Toyama Second Factory for manufacturing liposome formulations. Liposome is a drug delivery system that has shown promising results in facilitating the drug delivery.

The 701 facility is Japan’s first manufacturing facility of liposome formulation capable of commercial-level production, and is due to go operational in February 2020. The company has invested approx. 5 billion yen for this facility.

Liposome formulation contains active ingredient such as drugs in artificially constructed vesicles (liposome) made from organic phospholipids which make up cellular membranes and biomembranes. They are expected to selectively deliver a drug to targeted areas.

The 701 facility will be the Fujifilm group’s production hub for liposome. Designed to comply with GMP standards for Japan, the United States and Europe, the facility intends to supply liposome globally. FUJIFILM Toyama Chemical plans to use the new 701 facility to manufacture liposome-based investigational drugs and commercial-level drugs.

The 701 facility features manufacturing equipment and containment facilities designed and developed based on production know-how that FUJIFILM Toyama Chemical has accumulated through its sterile production of injectable formulations and advanced production technology that FUJIFILM Corporation has fostered in a wide range of product development operations.

At present, FUJIFILM Corporation through harnessing its advanced nano-dispersion technology, analysis technology and process technology, nurtured and evolved through its wide range of product development including the photographic film business, is conducting Phase I clinical trial of investigational liposome pipelines “FF-10832” and “FF-10850,” i.e. even-sized liposomes containing existing anti-cancer drugs in a stable form. In preclinical studies of “FF-10832” and “FF-10850,” the company observed the extension of survival period as a result of immune checkpoint inhibitor combination therapy. This has led to new cancer therapy research using liposomes. The company has been also working on researching further liposomes’ application for use with next-generation pharmaceuticals such as nucleic acid drugs and gene therapy drugs.