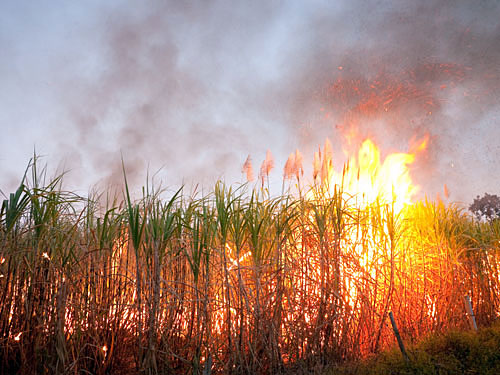 Following cancellation of NOC, standing GM mustard crop was burned in the presence of government officials of Rajasthan

New Delhi: The state government of Rajasthan, India, recently conveyed its decision to withdraw the no objection certificate (NOC) that was issued to the Center for Genetic Manipulation of Crop Plants (CGMCP), University of Delhi, for conducting second season biosafety research level (BRL-I) trial with GM Mustard. The trials had, however, been earlier approved by the Genetic Engineering Appraisal Committee (GEAC), the apex body for approving GM related activities in India.

On perusal of the directions issued by the government of Rajasthan, it was noted that no new facts regarding non-compliance of biosafety measures or evidence of harm have been cited as a reason, which compelled them to withdraw their NOC. As per the information available with the for environment and forests ministry, the state government allowed the completion of the GM mustard field trials by CGMCP at two locations whereas at the third location, the standing crop was destroyed by burning in the presence of officials from state agriculture department of Rajasthan.

Speaking in the parliament in this regard, the minister of state (independent charge) for environment and forests, Ms Jayanthi Natarajan, recently said, "The representation received from CGMCP regarding the above was considered in the GEAC meeting held on April 11, 2012, wherein the Committee opined that once the due process of permission to carry out experiments has been granted, then NOC should not be withdrawn arbitrarily as the regulatory system needs to be transparent, consistent and predictable."

"Notwithstanding the above, the committee further stated that agriculture being a state subject, decision of the government of Rajasthan not to allow field trials in the state needs to be honored," the minister added further.