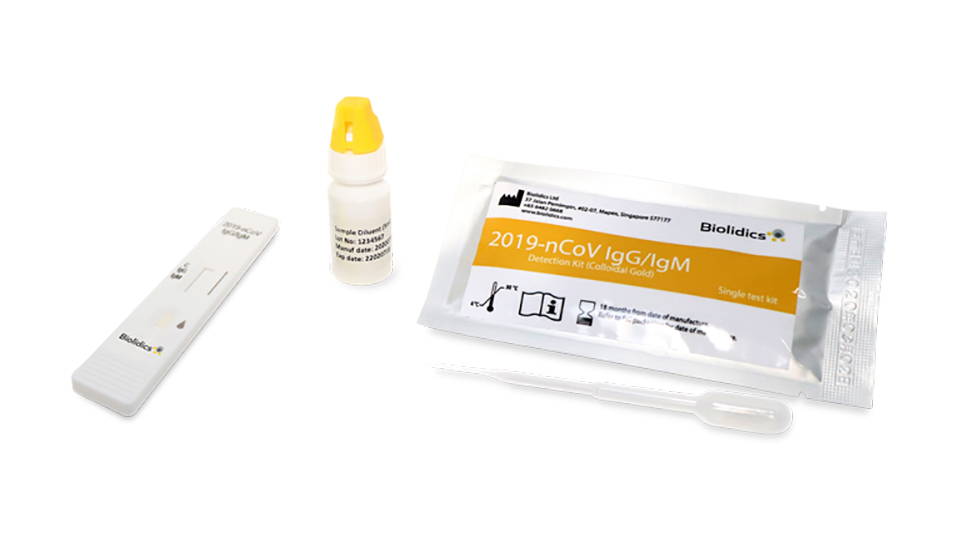 A rapid test kit for COVID-19 launched by former National University of Singapore (NUS) startup company, medtech firm Biolidics Limited, has been approved for distribution and sale in the US for use by clinical laboratories or healthcare workers for point-of-care testing. The company has also appointed an exclusive distributor in the US for its rapid test kit.

This adds on to its earlier approvals and authorisations in other countries including Singapore.

The rapid test kit identifies antibodies to SARS-CoV-2-the virus that causes COVID-19 at an accuracy of more than 95 per cent in 10 minutes. Co-founded by Director of the NUS Institute for Health Innovation & Technology (iHealthtech) Professor Lim Chwee Teck, Biolidics was formerly known as Clearbridge Biomedics.

Using human serum, plasma and whole blood, the rapid test is one of the few that combines both IgG and IgM antibody tests for COVID-19. IgG and IgM are both antibodies that are produced by humans in response to COVID-19 infection. As such, the rapid test serves as an added tool of detecting COVID-19, indicating recent or prior infection.

A negative result from testing does not rule out a SARS-CoV-2 infection, while a positive result could be due to past or present infections with non-SARS-CoV-2 strains, such as coronaviruses HKU1 or 229E. Both HKU1 and 229E cause the common cold. Thus, the rapid test kit may be used as a diagnostic support tool, interpreted together with clinical presentation. Results have to be confirmed with supplemental testing.

In a stock exchange announcement on 23 April, Singapore-listed Biolidics announced that Aytu Bioscience will be the exclusive distributor in the US, for the rapid test kits. Aytu has a binding commitment to buy an initial 500,000 COVID-19 rapid tests, and a total of no less than 1.25 million tests within three months.

The kits are already allowed for sale in the European Union, and have received the relevant approvals and authorisations by Singapore's Health Sciences Authority and the Philippines’ Food and Drug Administration.