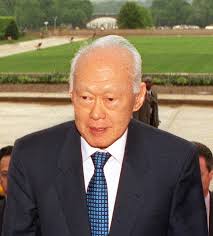 Lee Kuan Yew, the first Prime Minister of Singapore, who transformed Singapore from a small port city into a wealthy global hub, has died at the age of 91. He is recognised as the founding father of modern Singapore, and the only leader known to bring an entire country from third-world to first-world status in a single generation. A state funeral will be held on 29 March, after a week of mourning.

In an emotional televised address, his son Prime Minister Lee Hsien Loong paid tribute to him. "He fought for our independence, built a nation where there was none, and made us proud to be Singaporeans. We won't see another man like him", he said.

In 1954 Lee Kuan Yew co-founded and was the first secretary-general of the People's Action Party (PAP), leading it to eight consecutive victories. He campaigned for merger with Malaysia, a move deemed crucial to persuading Britain to relinquish its colonial rule in 1963; but racial strife and political tensions led to Singapore's separation from the Federation two years later.

Leading a newly independent Singapore from 1965, with overwhelming parliamentary control, Lee oversaw the nation's transformation from a relatively underdeveloped colonial outpost with no natural resources into an Asian Tiger economy. In the process, he forged a widely admired system of meritocratic, clean, self-reliant and efficient government and civil service, much of which is now taught at the Lee Kuan Yew School of Public Policy.

Lee Kuan Yew was born on 16 September 1923 in Singapore, the son of third-generation Chinese immigrants. Lee went to an English school in Singapore but his further education was disrupted by the Japanese occupation, which began in 1942. He, a committed socialist from his student days became a prominent trade union lawyer in later days. Lee graduated from Fitzwilliam College, Cambridge University, with a double starred-first-class honours in law.

India Prime Minister Narendra Modi condoled the demise of Singapore's founding father Lee Kuan Yew. "A far-sighted statesman and a lion among leaders, Mr. Lee Kuan Yew's life teaches valuable lessons to everyone. News of his demise is saddening," Modi tweeted. "In this hour of bereavement, our prayers are with Mr. Lee Kuan Yew's family and the people of Singapore. May his soul rest in peace," he added.