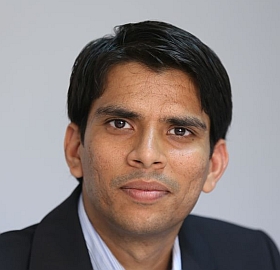 Dr Saleem Mohammad, who founded XCode Life Sciences in December 2010, first had the idea of starting this company while he was pursuing his PhD in Bioinformatics from the University of Nebraska, US.

"(There was) Cutting-edge research, committed researchers around me working for the love of science and the thirst of knowledge at a leading academic set up- it is easy for anyone to get an idea in this buzzing atmosphere," he says. "On the one hand, science was trying to catch up with nature in leaps and bounds with the whole genome sequencing in 2003, and on the other hand I discovered that my mother was diagnosed with diabetes. It was the first lifestyle-related disease that someone close to me was affected with. I suddenly became interested in my own health. That's when the idea really took some shape."

When he could not find a single organization in India that analyzed an individual's risk to diabetes, it further inspired him to follow up his idea with action. He already had the educational background and access to latest scientific understanding of genetics to back him up.

It took six months to develop the technology. The company was incubated at Vellore Institute of Technology (VIT) in Tamil Nadu, a southern state of India, where it was provided with space, infrastructure and opportunity to raise government funding worth $11,600 (Rs 6.25 lakh). The company then raised two rounds of angel investments of $200,000 each in 2011.

"Our technology was in a niche that required understanding of genetics as well as use of information technology, so it was challenging. Transforming the technology into a marketable product was the next challenge," says Dr Mohammad. The big break for him came when the second founder and investor, Mr R Narayanan, joined him. The company launched its first product, LifeLong Wellness Kit, in June 2012. This is when it received a second round of funding worth $250,000 (Rs 1 crore).

The company presently assesses four lifestyle disorders: diabetes, obesity, cardiovascular diseases and stroke. Each test is priced at $148 (Rs 7,999) and there is a value option of $185 (Rs 9,999) for all four tests. Since the launch of its first product, the company has garnered close to 100 customers, with more than 50 customers joining within two months of the launch. It is also in talks with hospitals and healthcare providers to offer the service through them.

The technology
A technology that can screen genetic information of a person and tell which diseases he or she may be susceptible to can go a long way in helping doctors suggest lifestyle changes or preventative steps to avoid them. Moreover, if information on a person's DNA is available, it can help decide which medicines will best suit the person or which medicines will have side-effects. XCode Life sciences has brought this to India. It uses saliva sample to extract DNA in order to predict diseases that a person may be prone to or is likely to get.

"We have tried to make our product and service as simple and painless as possible," says Dr Mohammad. The customer can call a toll-free number to have the saliva sample picked up. In four-to-six weeks, the report that contains details like the person's risk to diseases, metabolic profile and customized plan to prevent or delay the onset of chronic illnesses is sent. The analysis uses data from the field of genetic research as current as April 2012 and the company also provides access to counselors for advice.

XCode's service is uniquely designed for Indians, keeping in mind their cultural mindset, genetic predisposition and lifestyle. "It is the first time that DNA and wellness is being combined," he says. "At every step, we keep in mind that our customers are primarily of Indian origin. So for example, we customize our nutrition plan to suit palates and habits of the subcontinent."

Going forward, it plans to tell exactly when a disease will occur in a patient's life-cycle. "We plan to build sophisticated models that will accurately predict the onset of a disease. We believe in the next two-to-three years we should have accumulated enough data to answer such questions," says Dr Mohammad. In 2013, XCode is getting ready to introduce a service model for cancer.